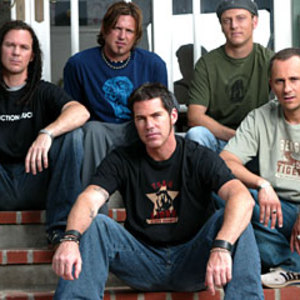 Dishwalla is a post-grunge alternative rock band which formed in Santa Barbara, California, United States in 1994. The band originally consisted of J.R. Richards (vocals, guitar, keyboards), Rodney Cravens (guitar), Scott Alexander (bass) and George Pendergrast (drums). Keyboardist Jim Wood joined in 1996, and George Pendergrast left in 1998, and was replaced by Pete Maloney. The band split in 2006, but reformed in 2008 with the lineup of Richards, Cravens, Wood and Pendergrast.

The band's name comes from Hindi, for a person who uses illegal equipment to descramble a satellite signal and share it with their neighborhood.

In 1996, the single "Counting Blue Cars" from the album Pet Your Friends climbed the charts and was much-played on the airwaves, bringing the band a short round of mainstream-scale success. The track earned them a Billboard Award for "Best Rock Song" for 1996 as well as two ASCAP Awards for "Rock Track Of The Year" in both 1996 and 1997. Their 1998 follow-up album, And You Think You Know What Life's About, failed to sustain the level of popularity achieved by "Counting Blue Cars". (Partially responsible for the situation was Universal's 1998 purchase and dissolution of A&M/Polygram, the label that produced the two albums.) The group is remembered by most as a one-hit wonder.

Dishwalla have since made a handful of other ventures into the limelight. In 1998 landed the song "Truth Serum" in The Avengers, in 1999, the song Stay Awake was featured in the movie Stir of Echoes, in 2002 the song "Home" was in the movie "The Banger Sisters", and the The WB series Charmed spotlighted Dishwalla as cast members in two episodes. The band, who sustains a loyal fan following, has gone on to release two more studio albums, including Opaline, a self titled album and a live album 'Live... Greetings From The Flow State.'

Live...Greetings From The Flow State

Live... Greetings From The Flow State

And You Think You Know What Life's About