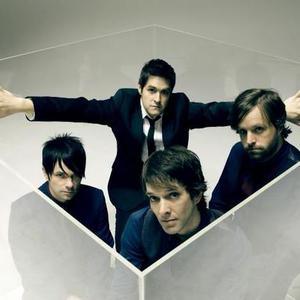 Jars of Clay is a popular Christian alternative pop group formed while attending Greenville College in Greenville, Illinois, United States in 1992. The group's sound has varied over the years as the band has experimented with pop, folk, rock, trip-hop, gospel, and hymnsong. Its self-titled album featured layered acoustic guitars over programmed trip-hop beats. Flood was the band's biggest crossover hit, and hit #37 on the Billboard Hot 100 and No. 12 on the Modern Rock charts.

The following albums saw large shifts in style. Much Afraid saw them releasing gorgeous - sometimes brittle - music, which the Band intended to have a "timeless" sound, while If I Left The Zoo is a quirkier but musically brilliant album, featuring considerably more keys and experimentation. The Eleventh Hour is their first true "rock" album. They returned to acoustic guitars for the "Furthermore" project, which featured two EPs - a live disc and an acoustic disc. The band's 5th album, Who We Are Instead continued some of the band's earlier sonic experiments and showcased some new gospel, bluegrass, and hymnsong influences. The hymnsong approach was continued on an album of new arrangements of classic hymns - Redemption Songs.

Good Monsters was released on Sept. 05, 2006. The album was hailed by CCM Magazine as "Album of the Year" - a controversial move considering that this announcement was made in August. "Good Monsters" further showcases the diverse style of the venerable quartet and is considered by the band to be their first true "rock" record. It is a rock driven record with electric guitars having prevalence on more of the songs than any previous albums. The album also has other stylistic influences and even includes a choir of African school children, while lyrically, it hits the darker side of their self-shaped genre.

In 2007, Jars of Clay announced that they were leaving Essential Records and were creating their own record label, Gray Matters. Jars of Clay released Christmas Songs through Gray Matters in 2007, and the Closer EP was released in the Summer of 2008.

April 21, 2009 marked the release of The Long Fall Back To Earth, containing two tracks from the Closer EP and 12 additional tracks. Two Hands is the first single from that release.

Under The Weather (Live In Sellersville, Pa)

Jars of Clay Presents the Shelter