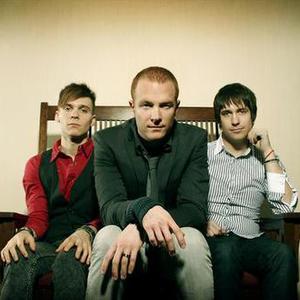 Eve 6 is an alternative rock band which formed in 1995 in La Crescenta, California, United States. The band split in 2004 and reunited in October, 2007, signing with Fearless Records and releasing new album Speak In Code in April 2012. The band consists of Max Collins (vocals, bass), Jon Siebels (guitar, vocals) and Tony Fagenson (drums). The band had previously released three albums, "Eve 6" (1998), "Horrorscope" (2000) and "It's All in Your Head (2003), with a fourth due in 2011. Two of the band's singles, "Inside Out" and "Here's To The Night", reached the Top 40 in the United States.

?Overall I'm really proud of it, and I think we're doing right by our fans, who've waited a long time for us to make another record. I think we're giving them something they'll enjoy,? says singer/bassist Max Collins. ?Once we got in the studio there was a lot of energy. There aren't any filler moments; each song has its purpose. This is the strongest collection of songs we've ever had on one record.?

In many ways, Speak In Code is a work with deep personal significance for Collins, who has weathered his share of personal adversity. The album is a testament to coming out okay on the other side, with friendships still intact, but it's within the journey that the story truly lies. Whether it's romantic relationships or dealings with his bandmates, communication?and its barriers?is a central theme underpinning the release.

?In some of the songs frustration is a theme. I was sort of looking at difficult personal relationships with a humorous spin in some places, and with more earnestness in others,? explains Collins. ?The title [Speak In Code] is a lyric from ?Curtain,' and there was something kind of evocative about it. In that song, I'm referring to being newly sober and just feeling like an open nerve, feeling freaked out, having people and life being sort of overwhelming. It's almost like people are speaking a language you don't understand.?

First single ?Victoria? lyrically weaves a tale that draws the listener into a hook-laden, 80?s-influenced anthem, putting a contemporary spin on the classic Eve 6 sound. ?[?Victoria'] indulges this paranoid what-if fantasy that kind of has a foot in the truth: My wife went on this girls' vacation to Mexico, and when I was looking through the photos, I saw my imagination start to go, and wrote that song,? Collins recalls. ?I'm convinced in my mind that something's going on that really isn't.?

Far from being just some nefarious nostalgia cash-in, Speak In Code is a genuine example of triumphing over one's obstacles, both professionally and personally, seven years in the making. Eve 6 say the time rebuilding was essential to regaining their footing, which seems more solid in 2012 than ever. "In a lot of ways, the years leading up to this album release was a bit of a ?paying our dues' situation. We certainly had to earn the right to have this opportunity again,? says Fagenson. ?This time around I think we realized just how hard it is to really get a rock band going and just when you think you're near the finish line you realize there's another hundred miles to go. But all that work and time simply strengthened our belief in what we were doing, and it was a crucial aspect of our development. It really taught us about stick-with-it-ness and perseverance."

"The time we spent apart really made us appreciate what we have in each other. It's a chemistry you can't manufacture,? adds Collins. ?We literally grew up playing music together. The bond that we have as a result of so much shared experience infuses the sound of the band."

With Speak In Code slated for an April 24th release, the band is gearing up for their much-awaited reintroduction to fans. Now part of the Fearless Records family, it's a guarantee Eve 6's music will reach a wide, eager audience of potential devotees, and a full slate of touring behind the release is slated for 2012. Diehards who caught the band live in prior years will undoubtedly be thrilled to see the trio once again on stage, but it will be a somewhat older, definitely wiser group that greets them. According to Collins, it's all good.

?We're looking forward to playing new songs, and reconnecting to the fans with new material,? says Collins. ?I feel this profound gratitude to the other two guys in my band. We've been through a lot?we've had the mountaintop moments and the Death Valley moments?and we're still here today, we all get along, and we made this thing together. It's almost miraculous, to me. There's this convergence that goes on for something that's bigger than the sum of its parts, and that's such a joyful, cool fucking thing.?

It's All In Your Head