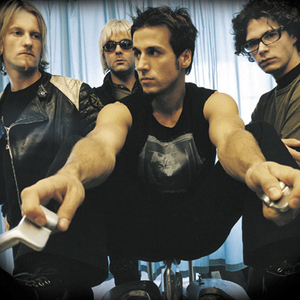 Our Lady Peace (also known as OLP) is an alternative rock band formed in Toronto, Ontario, Canada in 1992. The band has sold over five million albums worldwide, won four Juno Awards, and ten MuchMusic Video Awards. OLP has released 8 Studio albums to date with "Clumsy" often being considered the most popularized of the set. The Heavyweight Songfacts reports that their eighth studio album Curve was recorded from 2010 through 2012 at vocalist Raine Maida's home recording studio. It was released on April 3, 2012.

The band has sold over five million albums worldwide, won four Juno Awards, and ten MuchMusic Video Awards. OLP has released 8 Studio albums to date with "Clumsy" often being considered the most popularized of the set. The Heavyweight Songfacts reports that their eighth studio album Curve was recorded from 2010 through 2012 at vocalist Raine Maida's home recording studio. It was released on April 3, 2012.

Full circle: a theme that eagerly resonates with each member of multiplatinum survivors, Our Lady Peace. As the band approached the release of their seventh studio album, a feeling of renewal and excitement washed over Toronto's favorite sons in a manner not felt since their earliest days.

Self-produced in lead singer Raine Maida's Los Angeles home studio, the 10-track Burn Burn (in stores July 21 2009), marks the longest period between studio albums for Our Lady Peace. It also signifies a sonic and philosophical rebirth. The band now enjoys a creative and professional freedom that they haven't experienced since the release of their now classic debut. ?I think about the way we made Naveed,? Maida recalls. ?We were just starting, we knew nothing about the business and we had no expectations. It was four guys in a room just trusting their instincts. We went back to that. ?Liberating' doesn't really even sum it up.?

Burn Burn is a triumphant return to what Maida terms ?a proper, mature rock album,? steeped in the kind of raw intensity that drove their early material. Blinding rays of anthemic light make way to the tender poise and precision of a band that was looking for a way out and found a satisfying new way in.

With caution thrown to the wind, tracks such as the stunningly arranged ?Dreamland? and the overpowering first single, ?All You Did Was Save My Life,? soar above angry clouds of confusion and insecurity with an ascending clarity that can only come from experience and growth.

The pounding affirmation of ?The Right Stuff? and the vigilant build of band favorite ?Refuge,? also reinforce the notion that OLP now occupy a unique and enviable mindspace. ?We're not looking back with any kind of regret,? Maida points out, ?but we've been doing this long enough now that we know what we want to say. We didn't want to compromise a thing.?

Having scattered in different directions after the release of 2005's Healthy In Paranoid Times, all four members took on projects of their own, ranging from solo records, production and songwriting work, tours and guest performances. Over the last two years, Raine Maida, guitarist Steve Mazur, bassist Duncan Coutts and drummer Jeremy Taggart sporadically reconvened and lived at Madia's home, creating what he calls their best effort to date.

Members would leave each session without tapes, giving themselves a much fresher perspective on the material they created when they returned. Producing themselves and an adherence to rolling tape off the floor gave birth to an urgent, natural body of work. ?We didn't put a lot of pressure on ourselves,? Coutts confirms. ?We left things alone and haven't done that in a long time."

?For us,? adds Maida, ?a big part of this band is playing live. It has to be something that we're going to enjoy; a real dynamic collection of songs. When we really started to understand that, the record took on this whole other life.?

This work ethic allowed room for guitarist Steve Mazur, who joined the band in 2002, to blossom on Burn Burn. ?On this album I really felt comfortable with my role and what I sound like as the guitarist of Our Lady Peace.? Mazur shines on tracks such as ?Escape Artist? and ?Paper Moon,? a song where Mazur's solowork was nailed on the first go-round.

Our Lady Peace is also striking out on their own professionally this time around, opting for what the band terms a ?true partnership? with both North American record labels. ?We've never been this prepared for an album,? adds OLP founding member Jeremy Taggart. ?In the past, we've never had the foresight to have maybe two or three singles in the can already with videos, etc.?

?Nobody knows us better than ourselves,? Taggart continues. ?We didn't over think a good song or idea or under think anything. The good songs really picked themselves.?

Playlist: The Very Best Of