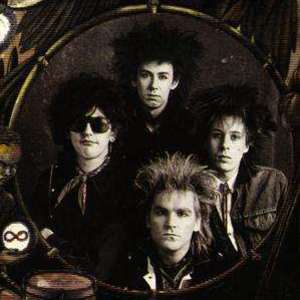 The Alarm is an alternative rock band which formed in 1978 in Rhyl, Wales. For most of their career the band consisted of Mike Peters (vocals, guitar), Dave Sharp (guitar), Eddie Macdonald (bass) and Nigel Twist (drums). The band split in 1991, but reunited in 2001. The band began in 1978 in the North-Wales town of Rhyl, under the name of 'Seventeen'. Its 4 members were Mike Peters, Dave Sharp, Eddie Macdonald and Nigel Twist. They knocked around the music scene for a while with little success and reformed as 'Alarm Alarm' (taken from one of Seventeen's songs) in 1981.

The band began in 1978 in the North-Wales town of Rhyl, under the name of 'Seventeen'. Its 4 members were Mike Peters, Dave Sharp, Eddie Macdonald and Nigel Twist. They knocked around the music scene for a while with little success and reformed as 'Alarm Alarm' (taken from one of Seventeen's songs) in 1981. Then revered BBC DJ John Peel compared them to Duran Duran and Talk Talk and they quickly changed their name to 'The Alarm'. With the change of their name, came a change of location. The Alarm moved to London and shared a small flat in the city to save money for their first single, 'Unsafe Building' b/w 'Up For Murder'. They came to the attention of U2 in '82 and toured with them as their support band (they frequently reprised that role). In 1983, 'Sixty-eight Guns' was released. It became their biggest hit, propelling them to #17 in the charts, and they appeared on Top of The Pops for the first and last time. Throughout the decade, the band made more albums, including 'Strength' and 'Eye Of The Hurricane'; but by the late 80's The Alarm had begun to drift apart, with Dave Sharp feeling isolated and left out of the song writing process. The relationships within the band were deteriorating. Their last album, 'Raw', was fragmented and the group were breaking apart. On June 30th 1991 at the Brixton Academy, Mike Peters announced on stage that he was leaving 'The Alarm' without telling the rest of the band. And thus The Alarm ended.

The Alarm can lay claim to a series of 15 Top 50 UK singles, including their classic hits, "68 GUNS", "SPIRIT OF 76", "RAIN IN THE SUMMERTIME", "STRENGTH" "45 RPM" and of course "THE STAND".
Ten successful albums and over 5 million sales worldwide, The Alarm's pioneering use of acoustic guitars brought the band into direct contact with the likes of Bob Dylan, Neil Young and U2, all whom have appeared and sung on stage with The Alarm.

In 2004 The Alarm returned to the singles charts with 45RPM, the first single released from the bands album, "IN THE POPPYFIELDS".
The story of how the band released the single under a pseudonym, appearing to be a brand new musical act, complete with a group of 21 year olds appearing in the video for 45rpm to help complete the scam, became an international controversial news story and elevated the bands profile to new heights and a major motion picture based on the story is scheduled for production.

In late December 2005, singer Mike Peters revealed he has been diagnosed with a form of cancer called chronic lymphocytic leukemia, but it was diagnosed in its early stages and his prognosis is favourable. This came after he had been in remission from cancer previously that he had fought in the 1990s. Indeed the 1996 solo album Feel Free has a song titled "Regeneration" in which he discusses his diagnosis and subsequent alternative medicine that he believes help cure him.
In 2007 Mike launched the 'Love Hope Strength' foundation which sets to raise funds andand awareness in fighting cancer.

Most recently, in July 2008, The Alarm will be releasing their latest full length album "Guerilla Tactics" Mixed by Gilby Clarke ( Guns N' Roses) on 7 July 2008 and will embark on a U.S. tour this summer on the "Rockin' The Colonies" tour with The English Beat and The Fixx to be followed by The Guerilla Tactics UK Residency tour in 4 Major UK Cities in November 2008.

Mike peters and the band in various forms still meet and play on occasions at local venues. Mike has a strong following and working on his solo career and still is heavily involved in music