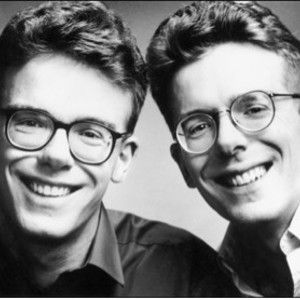 The Proclaimers are a Scottish band composed of identical twin brothers, Charlie and Craig Reid (born 5 March 1962, in Leith). They are probably best known for the songs "Letter from America", "I'm On My Way" and "I'm Gonna Be (500 Miles)". The band tours extensively throughout Europe and other continents. They have released eight studio albums from 1987 until the present, as well as two compilation albums and a DVD, and their next studio album is expected for 2012.

Craig Reid and Charlie Reid were born in Leith, Scotland in 1962, and grew up in Edinburgh, Cornwall and Auchtermuchty. After several punk rock bands at school they formed The Proclaimers in 1983.

The pair came to public attention when an Inverness based fan sent their demo to the British band The Housemartins, who were impressed enough to invite The Proclaimers on their 1986 UK tour. The exposure of the tour won them a January 1987 appearance on the British pop music television programme The Tube on Channel Four; "Letter from America" peaked at number 3 in the UK Singles Chart, whilst the album This is the Story went gold. The follow-up album Sunshine on Leith featured "I'm Gonna Be (500 Miles)" and "I'm On My Way". They had a hit with their EP King of the Road, which reached number 9 in UK in 1990.

In March 2007 they recorded a new version of "I'm Gonna Be (500 Miles)" with television comedy characters Andy Pipkin (played by Matt Lucas) and Brian Potter (Peter Kay) for the Comic Relief charity. A long list of celebrities were featured in the music video for this new version, including David Bellamy, Rod, Jane and Freddy, Paul O'Grady, David Tennant, Frank Sidebottom and many more. This new version of the song reached number 1 in the UK Singles Chart.

The band was one of The B-52s' touring partners on their Funplex tour in Australia and New Zealand in November 2009, alongside Mental as Anything.

The brothers are fans of Hibernian Football Club, and "Sunshine on Leith" has become a theme song for the club, being played at home matches for important fixtures, such as the Edinburgh derby versus Heart of Midlothian FC, the club's city rivals. Charlie and Craig Reid appeared at their Easter Road stadium for the 'Hands Off Hibs' campaign in 1990 when Wallace Mercer, a wealthly Edinburgh businessman with direct connections to Hearts FC, attempted a takeover of the club but was defeated by fan pressure.

They are also well-known supporters of Scottish independence and have at various stages of their lives been activists for the Scottish National Party, expressing such views during their promotional tour of Britain in March 2007. However in April 2007 Charlie Reid announced that he had switched his allegiance to the Scottish Socialist Party in protest at the Scottish National Party's receipt of funding from big business. Many of their songs reflect their political views, such as "Letter from America" and "Cap in Hand".

On 16 May 2006 the twins announced their participation in a campaign to free a fellow Scot, Kenny Richey, from his death row sentence in Ohio, including an appearance at a charity concert. Also, in 2010 they participated with Billy Bragg in a show supporting Reprieve, charity that fights the death penalty. The Proclaimers also support other charities such as The Lighthouse Foundation (addiction victims), AICR (cancer research), Drake Music Scotland (help disabled people through music) or 500 miles (amputees or disabled people in Africa).

Let's Hear It For The Dogs