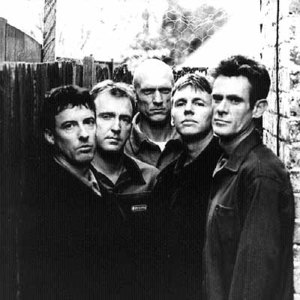 Midnight Oil were an influential alternative rock band formed in Sydney, Australia in 1976. The band originally formed as "Farm" in 1972. The band is best known for their political activism and environmentalism and their 1987 worldwide hit single "Beds Are Burning". For most of their career, the band consisted of Peter Garrett (vocals), Jim Moginie (guitar, keyboards), Martin Rotsey (guitar), Peter Gifford (bass, vocals) and Rob Hirst (drums).

The band split in 2002 to allow Garrett to focus on his political career. He is currently a member of the Australian House of Representatives and the was the Australian Minister for the Environment, Heritage and the Arts from 2007-2010. As of 2010, he is the Australian Minister for Education. The band has reunited since then for two benefit concerts: the 2005 WaveAid concert for Indian Ocean Tsunami victims and in March 2009 the band reformed for two shows in Canberra as a warm up for "Sound Relief" in Melbourne, a benefit concert for the Victorian Bushfire victims.

The Oils, as they are known to their fans, began as a progressive rock band called Farm in the early 1970s, then under the Midnight Oil name developed a reputation as an impressive and hard-working live act associated with the surfing community of Sydney. They became one of Australia's most respected bands, known for their live performances, and also for their activism and support for community groups and causes.

Midnight Oil's first two albums Midnight Oil and Head Injuries were originally released on an independent label, followed by the EP Bird Noises in 1980. Their third album, Place Without A Postcard, was recorded in Great Britain with the respected producer Glyn Johns (Led Zeppelin, The Who) on the back of a brief tour of the UK.

Their fourth album, 10,9,8,7,6,5,4,3,2,1 (spoken as "10 to 1"), marked both the Oil's major Australian breakthrough and the beginning of their successful association with producer Nick Launay. This album also saw considerable success in the college radio scene of the US, prompting a tour of North America.

Following on from 10-1, the Oils with Nick Launay recorded the fifth album Red Sails In The Sunset during a three month stint in Tokyo in 1984, becoming the first known western band to record an entire album in Japan. Red Sails was reasonably successful in Australia, featuring songs like Best Of Both Worlds and Kosciuszko, but the album's quirky, experimental sound failed to make major inroads overseas. Also during 1984, frontman Peter Garrett was narrowly defeated in an election for the New South Wales, representing the Nuclear Disarmament Party (NDP).

In 1985, following the release of the EP Species Deceases the Oils embarked on a career-changing tour of remote Aboriginal communities of outback Australia with legendary Aboriginal group, the Warumpi Band. The tour led to the recording of Midnight Oil's major international breakthrough success Diesel And Dust, released in 1987 which featured their biggest international hit Beds Are Burning. The following album Blue Sky Mining, released in 1990 had two songs that topped the US Modern Rock charts, Blue Sky Mine and Forgotten Years. Both Diesel and Dust and Blue Sky Mining were produced with Warne Livesey.

Between 1988 and 1992, the band's Diesel and Dust and Blue Sky Mining discs became known worldwide, as did their political activism for causes ranging from nuclear disarmament to aboriginal rights and environmental issues. Their subsequent albums sold less well outside Australia, but the Oils maintained a following throughout the 1990s and into the new century.

The Midnight Oil lineup remained quite stable over the band's long career: Garrett as lead singer and harmonica, Jim Moginie on guitar and keyboards, Martin Rotsey on guitar, and Rob Hirst on drums. Andrew (Bear) James, the first bass player, left in 1979 citing the pressures of touring. Peter Gifford replaced him and in turn quit the band in 1987 due to deteriorating health. New Zealander Bones Hillman, (ex Swingers) replaced him, and remained with the group until its dissolution in 2002. Gary Morris was the band's manager and effective sixth member (often credited with the simple title "Business, no singing" on albums) throughout.

In 2004 Peter Garrett was elected to Federal Parliament as the Labor member for Kingsford-Smith in Sydney. In November 2007 he became Minister for Arts in the Australian government as a member of Prime Minister Kevin Rudd's front bench. Jim Moginie continues his involvement with music through his own band, the family dog and as a producer for artists such as Sarah Blasko. Rob Hirst is also involved with several musical projects such as Hirst and Greene, The Ghostwriters, The Angry Tradesmen and The Backsliders.