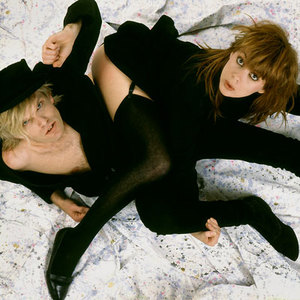 No doubt best known for their ode to self-pleasure, Divinyls (often incorrectly referred to as "The Divinyls") - the core of the which is and has been fiery vocalist Christina Amphlett and guitarist Mark McEntee - were a long-standing fixture in the Australian scene during the 1980's, scoring multiple Australian hit singles in the early '80's before breaking big internationally with "I Touch Myself" and "Ain't Gonna Eat Out My Heart Anymore" in the early 90's.

The duo formed in Sydney, Australia, after meeting at a Sydney Opera House concert in 1980, and for the first two years they performed in pubs and clubs in Sydney's Kings Cross. They provided the soundtrack for the movie Monkey Grip with Amphlett (who is first cousins with 1960s teen surf-pop singer Little Pattie) also acting in the film. She received a Best Supporting Actress nomination from the Australian Film Institute for her performance and the group had two hit singles, "Boys In Town" and "Only Lonely" from the soundtrack.

They also had hits with their cover versions of The Easybeats's "I'll Make You Happy", and the Syndicate of Sound's "Hey Little Boy" ("Hey Little Girl" with the gender switched). Amphlett became a controversial and highly visible celebrity, known for her brash and overtly sexual persona, and for the subversive humour in both her lyrics and her performances. They toured and performed in the United States and established a fan base there, without achieving major commercial success.

Original bassist Jeremy Paul (ex Air Supply) left the group in 1982. He was replaced by Rick Grossman (ex Matt Finish), who left in 1987 to replace Clyde Bramley in Hoodoo Gurus.

In 1991 they released the single "I Touch Myself" which became their only Australian number one single, and it reached number 4 in the US, and number 10 in the UK. A disagreement with their record company in the US stifled their future development, however in Australia they continued to release popular albums, and to achieve several more hit singles ("Love School", "Make Out Alright", and "I'm On Your Side"). During the 1980s and 1990s Amphlett began to collaborate as a songwriter with such artists as Chrissie Hynde and Cyndi Lauper, and she and McEntee worked on solo projects.

From the late 1990s, Amphlett and McEntee have concentrated largely on solo projects and their collaborations with other artists. Nonetheless Divinyls, as a recording and performing entity, has never been officially disbanded.

I Touch Myself (CDS)