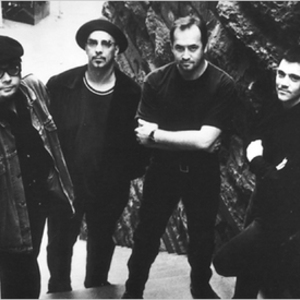 The Smithereens are a powerpop/rock group from Carteret, New Jersey. The group formed in 1980 and consists of Pat Dinizio (lead singer/guitar), Jim Babjak (guitar), Mike Mesaros (bass), and Dennis Diken (drums). The group gained some notoriety when a single from its first album, Blood And Roses, was included on the soundtrack for and as the theme song of the 1986 Albert Pyun movie Dangerously Close and the video got some moderately heavy rotation on MTV.

The group spent some time in its initial semi-celebrity phase defending itself in Rolling Stone against thinly-veiled accusations of sounding too much like The Byrds and The Beatles, pointing out that its Marshall Amplifier-heavy live sound was closer to heavy metal than it was to The Beatles.

Along with a basic Eastern-coast roots-rock sound that owed much to the inspirations of DiNizio, including Buddy Holly, The Who, The Clash, Elvis Costello, and Nick Lowe, the Smithereens deployed a uniquely retro obsession with mod, the late British Invasion pop of John's Children and The Move, and other artifacts of fifties and sixties culture that lent its music substance and style. The highest position a Smithereens album attained on the Billboard pop charts was in 1990, when 11 peaked at #41 on the strength of the single A Girl Like You (which hit #38). The group is still active and tours frequently, but went for seven years without releasing a new studio album, following God Save The Smithereens in 1999.

In January 2007, the band released a cover of the album Meet the Beatles titled Meet the Smithereens. Bassist Mike Mesaros does not appear on the album, replaced by Severo "The Thrilla" Jornacion . An album of original material was promised for later in the year, but Christmas With The Smithereens, released in October 2007, included only three original songs along with nine covers of Christmas songs.

Meet The Smithereens - Tribute To The Beatles

From Jersey It Came! The Smithereens Anthology CD2

From Jersey It Came! The Smithereens Anthology CD1