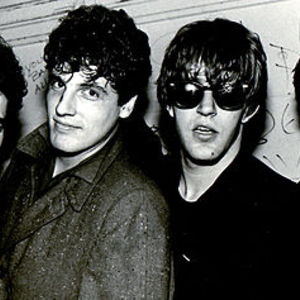 The Plimsouls are an American rock band formed in Los Angeles, California in 1978. Formed by singer, guitarist and songwriter Peter Case (who had previously fronted early new wave band The Nerves), the core lineup of the Plimsouls included Peter Case on vocals & Vox guitar, guitarist Eddie Munoz, bassist David Pahoa and drummer Lou Ramirez. The band's first release was an EP, Zero Hour in 1980, followed by a full length album in 1981, The Plimsouls.

The band achieved its greatest notoriety in 1983 when the single release "A Million Miles Away" was included on the Valley Girl motion picture soundtrack and became a minor new wave rock radio hit. The band, which also appeared on camera in the movie, performing the song and parts of two others, quickly re-recorded the song for inclusion on a second album, Everywhere At Once, but broke up shortly after. Brilliantly produced by bassist Jeff Eyrich who went on to join the jazz combo Dave's True Story, Everywhere At Once has since come to be regarded as a power-pop classic. Case continued with a solo career while pursuing his interests in music history. In 1996, The Plimsouls reunited for a few shows and some recording sessions, resulting in a little-heard reunion album called Kool Trash which featured an appearance by Blondie drummer Clem Burke. They have continued to reunite occasionally since that time.

One Night in America (Vinyl)