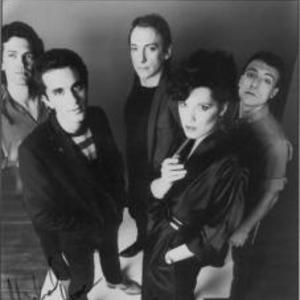 There are three bands called The Motels. 1) An 80s new wave band from Los Angeles, California. 2) An alternative/indie band from Rio de Janeiro, Brazil 3) A punk/funk band from Glasgow, Scotland 1) The Motels are a New Wave music band from the Los Angeles area best known for Only the Lonely and Suddenly, Last Summer, both of which peaked at #9 on the Billboard Hot 100 in 1982 and 1983, respectively.* First incarnation

3) A punk/funk band from Glasgow, Scotland

1) The Motels are a New Wave music band from the Los Angeles area best known for Only the Lonely and Suddenly, Last Summer, both of which peaked at #9 on the Billboard Hot 100 in 1982 and 1983, respectively.*

First incarnation
Formed in 1971 in Berkeley, California, the band (then called The Warfield Foxes) moved to Los Angeles by 1973 seeking a record deal. The band consisted of Martha Davis on vocals and guitar, Dean Chamberlain on lead guitar, Chuck Wada on 2nd lead guitar and others. While in L.A., the band changed its name to "The Motels" and the line-up consisted of Martha Davis, Dean Chamberlain, Chuck Wada, Robert Newman on drums and Richard d'Andrea on bass. Both Martha Davis and Chuck Wada contributed original songs to the repertoire.

The Motels and two other local bands, The Pop and The Dogs, kicked off the local band scene with a hallmark concert at a self-produced show, 'Radio Free Hollywood' held at the venerable old theatre, Troupers Hall. (Prior to this show, few if any unsigned bands played local high profile clubs like the Whisky and The Roxy.) The band guested on Rodney Bingenheimer's popular radio show.

After recording a demo for Warner Brothers, which was turned down, they were offered a contract with Capitol but the band turned that down by disbanding in 1976. Dean Chamberlain was soon heard again in his band Code Blue and signed to Warner Brothers Records. Richard d'Andrea joined The Pits and later enjoyed almost three years with The Know. Robert Newman is a successful art director and designer. Chuck Wada still writes and performs and is a financial advisor.

Second, most successful incarnation
In March 1978, Martha Davis was approached by lead guitarist Jeff Jourard (formerly of Tom Petty and The Heartbreakers) to form a new Motels. Extensive auditions resulted in a new lineup consisting of Jourard's brother Marty Jourad who played both saxophone and keyboards, Michael Goodroe on bass, and Brian Glascock on drums.

Short on funds, they shared rehearsal space with The Go-Go's at L.A.'s notorious punk basement, The Masque. Playing in Chinatown at Madame Wong's restaurant/nightclub so many times they were nearly the house band, they began to draw a faithful crowd around the L.A. music scene. By Mother's Day 1979, The Motels had signed with Capitol Records and released their first album in September of that same year. Their first single, "Closets and Bullets," made no impact on the charts, but their second single, "Total Control," found its way to the Top 20 in France and the Top 10 in Australia.

In 1980 Jeff Jourard was replaced with Martha's boyfriend Tim McGovern as lead guitarist. The band went back into the studio to record their second album, entitled "Careful." Released in June of 1980, the album made it to the #45 spot on the US album charts. In Europe and the UK, the songs "Days Are OK" and "Whose Problem?" were Top 50 hits, and the latter was also a top hit in Australia. "Danger" was a Top 20 hit in France.

The band hired record producer Val Garay for their next album. The album, "Apocalypso." was scheduled to be released in November 1981, but after hearing the final product Capitol Records rejected it. Frustrated, the band attempted to go back and rerecord the entire album. In the process, Davis and McGovern's relationship had gone sour. By December of 1981 McGovern was no longer in the band. The rest of the members forged on and finished recorded the new album with Val Garay producing. Using studio musicians to fill in for the vacant guitar spot, the band was able to finish the album by March of 1982. Having auditioned several guitarists to take McGovern's place, Guy Perry finally was given the job. The album, now titled "All Four One," was released in March of 1982.

Before any singles were released, the song "Mission of Mercy" had made enough airplay to land the #33 on the Billboard Rock Album Cuts chart. Their first single from the album, "Only the Lonely," found its way into the Top 10 in the U.S. by June. Other hits included "Take the L" and "Forever Mine." Their first successful U.S. album coincided with the emergence of MTV, which led to music videos for both "Only the Lonely" and "Take the L." Martha Davis won a "Best Performance in a Music Video" award in 1982 for her performance in the "Only the Lonely" video. By now, the band had added a sixth member, Scott Thurston.

The Motels returned in 1983 with the album "Little Robbers." Garay by now not only was producing their albums, but their videos as well; and, he became the band's manager. The first single from the album, "Suddenly Last Summer," made its way to the Top 10 in the U.S. The album went gold in the U.S., Canada, and several other countries. Despite their success, the band cancelled their tour and fired Garay as manager for personal reasons.

With new management, the band forged on in 1984. They appeared on Saturday Night Live in January. They recorded songs for two movie soundtracks: "Long Day" was recorded for Moscow on the Hudson and "In The Jungle" was recorded for the movie Teachers.

In 1985 the band released their sixth album "Shock." The first single "Shame" became a Top 30 hit on the pop charts and a Top 20 on the dance charts. Two other singles were released, "Shock," and "Icy Red."

On February 13, 1987, Davis decided to dissolve the band and go solo.She reformed a version of the band called Martha Davis & The Motels, in 1998; as of 2006 she continues to appear under that name with various lineups.

Three members of the 1978 version of the band reunited with Davis in 2004 for an appearance on Bands Reunited; rejoining Davis were Michael Goodroe, Marty Jourard, and Brian Glasscock. Also appearing in that group was Adrian Peritori (aka "Guy Perry.") The Motels also appeared on the U.S. version of Hit Me Baby One More Time in 2006, and on the Nick at Nite reality program "Class Reunion" in 2007.


2) The Motels are an alternative/indie rock band consisted of four 15-year-old members formed in Rio de Janeiro, Brazil in 2006. The Motels have composed five songs, however, only one ("Under Street Lights") has been professionally recorded, and "Knapsack" is still in progress. Their music has influences from bands such as The Strokes, Arctic Monkeys, Radiohead, Bloc Party, The Libertines, The Velvet Underground, Moptop, Legi&atilde;o Urbana, and Franz Ferdinand.

Two versions of Under Street Lights and the demo of Knapsack can be previewed in their website, www.myspace.com/themotelsrio.

(3)The Motels were formed by rock/jazz guitarist Cliff Hanley in 1976, based in Glasgow, Scotland. They mixed funk with punk and added reggae to the mix, with even some bebop creeping in. An extended fill-in by Ronnie Teape for Al Kerr on keyboards also added a bit of prog-rock,too. An early incarnation of the band included Danny Thomson on piano and Louie Rose (of Georgie Fame's Blue Flames) on congas. A lead guitarist, Tam Kerrigan, typical of Glasgow's fine tradition in rock, joined the front line for some months. Several bass players joined, notably the Pastorious-influenced Billy Lang, and Gordon Blank, from another Glasgow band, The Khyber Trifles.There was darkness as well as humour in their music, and they influenced other Scottish bands of the 70s. They eventually split up in London (1981) and the members joined other bands or moved on to session work, Hanley and frontman Craig Lockhart forming a production company.

If Not Now Then When CD2

If Not Now Then When CD1