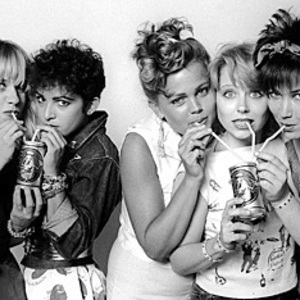 Go-Go's are an all-female American rock band formed in 1978 in Los Angeles, California. They made history as the first all-female band that both wrote their own songs and played their own instruments to top the Billboard album charts. Go-Go's initially consisted of Belinda Carlisle (vocals), Jane Wiedlin (guitar & vocals), Margot Olavarria (bass) and Elissa Bello (drums). Charlotte Caffey (lead guitar & keyboards) was added later in 1978 and in the summer of 1979, Gina Schock replaced Bello on drums.

During December 1980, original bassist Margot Olaverria was replaced with Kathy Valentine. With these line-up changes, the group began moving towards their now more-familiar power pop sound.

They were orginally formed as a punk band and had roots in the L.A. punk community. During late 1979, the band recorded a 5-song demo at Gold Star Studios in Los Angeles. Go-Go's subsequently spent half of 1980 touring England, earning a sizable following and releasing the demo version of We Got The Beat on Stiff Records. Go-Go's signed to I.R.S. Records in April 1981. Their debut album Beauty and the Beat was a surprise hit; it topped the U.S. charts for six weeks and eventually received a triple platinum certification. In 2003, the album was ranked number 413 on Rolling Stone magazine's list of the 500 greatest albums of all time.

Our Lips Are Sealed and a new version of We Got The Beat were extremely popular singles in North America in early 1982. In this period Go-Go's became America's sweethearts and started building a fan base. In 1982 the group was nominated for a Grammy Award for Best New Artist.

The follow-up album Vacation received mixed reviews and sold far less than Beauty and the Beat. However, the album was certified Gold in the U.S. and spawned another top 10 US hit with the title track: Vacation. In 1984 the group returned with their third record album Talk Show. The album tracks Head Over Heels and Turn To You were both Top 40 hits in the US. Despite the favorable critiques, the album sold far less than the previous two, not reaching the top 10 and not receiving any certification.

Personality conflicts and creative differences within the group were also taking a toll, as were drug addiction problems for some band members. Jane Wiedlin announced her departure from the group in October 1984. The band sought a replacement for Wiedlin and finally selected Paula Jean Brown as their new bassist, with Valentine moving to rhythm guitar. Soon Carlisle and Caffey realized their hearts were no longer in the group and decided to disband Go-Go's in May 1985.

In 1994 the classic line-up got together again to release the 2-disc retrospective Return To The Valley Of The Go-Go'S, which featured three new recordings. The single The Whole World Lost Its Head peaked at #21 on the Billboard Modern Rock charts. The band toured again to promote the release.
In 2001, the band released an album of new material: God Bless The Go-Go's. The only released single Unforgiven peaked at #22 on Billboard's Adult Top 40 chart. The album was well-received by critics, and peaked at number #57 in the Billboard 200 chart.

Go-Go's have toured regularly since 1999. In 2011 Go-Go's announced the Ladies Gone Wild tour to commemorate the 30th anniversary of the release of Beauty and the Beat.

Return To The Valley Of The Go-Go's CD2

Return To The Valley Of The Go-Go's CD1