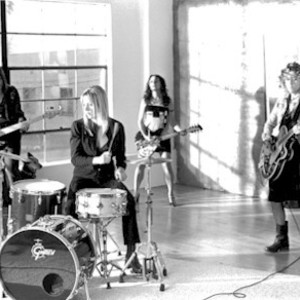 The Bangles were one of the new generation of independent all-women bands that followed The Go-Go's in the early 1980s. Consisting of Susanna Hoffs (guitar, vocals), Debbi Peterson (drums, vocals), sister Vicki Peterson (guitar, vocals,) and Annette Zilinskas, who was later replaced by Michael Steele, (bass, vocals). The band was formed in Los Angeles in 1981 as The Supersonic Bangs, later shortened to The Bangs.

They were forced to change their name to the Bangles when a band from New Jersey, also named the Bangs, threatened to sue. The single 'Manic Monday', written by Prince launched their international career. After 3 successful albums ("All Over The Place", "Different Light" and "Everything"), The Bangles broke up.
Susanna Hoffs released two solo albums in the 90's (a third album remained unreleased). Vicki Peterson joined the Continental Drifters. Debbie Peterson had a short-lived career with Siobhan Maher as Kindred Spirit, while Michael Steele lived in semi-retirement in California.

The Bangles reconvened in 2000 and recorded a reunion album, released in 2003, on Koch Records called "Doll Revolution". By lucky coincidence(?) their single 'Eternal Flame' had since been covered by, and become a hit record for, Atomic Kitten which helped to rekindle interest in its original artist.

"Sweetheart of the Sun," The Bangles first album of original material since "Doll Revolution" was released September 27, 2011. The Anna Lee (Sweetheart Of The Sun) Songfacts states that the album was recorded in various home studios - those of Vicki Peterson and Susanna Hoffs as well as the Hollywood Hills home studio of singer-songwriter Matthew Sweet, who produced the record.

Ladies And Gentlemen... The Bangles!

Sweetheart of the Sun

Eternal Flame: The Best Of

Playlist: The Very Best Of Bangles