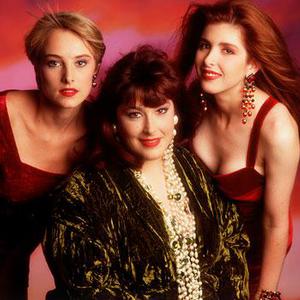 Wilson Phillips was an American pop group made up of Carnie Wilson, Wendy Wilson and Chynna Phillips. Although their success in the early 1990s was brief, they scored four Grammy Award nominations, two American Music Award nominations and a Billboard Music Award, they are also famous for being the offspring of prominent musicians; the Wilsons are the daughters of Brian Wilson of The Beach Boys, while Phillips's parents are John Phillips and Michelle Phillips of The Mamas & the Papas.

The Wilson sisters and Phillips were friends from childhood, growing up in southern California in the 1970's and 1980's. The three shared a love of music and songwriting, and developed their own style of vocal harmonies. In 1989, producer Glen Ballard and SBK Records signed the trio to a record deal.

Wilson Phillips released their debut album Wilson Phillips in 1990. They shot to fame with their debut single, the # 1 hit "Hold On". The album was a hit, producing three number one singles and selling 10 million copies worldwide.

They released their follow-up album Shadows and Light in 1992. It was much less successful, producing no top ten singles and selling one million copies. Shortly after, the group decided to split up.

During the next decade, the group went their separate ways. Chynna Phillips released a solo album, "Naked and Sacred" in 1995, while the Wilson sisters released a Christmas album in 1993 and an album "The Wilsons" in 1997. Carnie also went on to host her own television talk show, while Phillips married actor William Baldwin. A "Greatest Hits" album was released in 2000, although the group did not officially reunite for this release. Carnie made headlines in 1999 when she underwent gastric bypass surgery live on the internet and lost over 20 dress sizes.

Wilson Phillips reunited in 2004 to release California, an album of cover songs. A single, 'Go Your Own Way,' a remake of the original by Fleetwood Mac, peaked at #13 on the Billboard Adult Contemporary chart. The album debuted at #35 on the charts with 31,000 copies sold but due to the lack of promotion the album has yet to reach sales of 100,000 copies. In New Zealand the album was a surprise hit, reaching the top 10 and amassing gold sales following 'Go Your Own Way' topping the adult contemporary radio chart for several weeks.

The Best Of Wilson Phillips