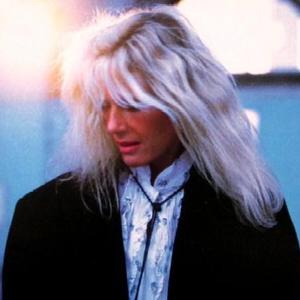 Kim Carnes (born July 20, 1945 in Los Angeles, California) is an American singer-songwriter. She is noted for her distinctive, raspy voice which she attributes to many hours spent singing in smoky bars and clubs. Carnes was a member of New Christy Minstrels from 1966 until 1970. Kenny Rogers was also a member, and during this time Carnes met and married Dave Ellingson, with whom she would write most of her songs.

Carnes was a member of New Christy Minstrels from 1966 until 1970. Kenny Rogers was also a member, and during this time Carnes met and married Dave Ellingson, with whom she would write most of her songs. For a short while in the early 1970s, she and Ellingson formed the folk duo Kim and Dave, which was not successful. She began releasing albums during the early 1970s. Her self-titled album in 1975 contained her first hit, "You're A Part Of Me," a duet with Gene Cotton (and a cover of a minor hit for Canadian singer Susan Jacks earlier that year) that went to #36 on the charts. This album was followed in 1976 with Sailin'. One track, "Love Comes From Unexpected Places," won best song at the 1977 American Song Festival and gained some additional notice after it was recorded by Barbra Streisand on her 1977 album Streisand Superman.

In 1980 a duet with Kenny Rogers titled "Don't Fall In Love With A Dreamer" became a major hit on the country and western charts and also became a pop hit. Her cover version of the Smokey Robinson & The Miracles song "More Love" became her first solo hit single in 1980 when it reached the U.S. Top 10.

In 1981 she recorded the Jackie DeShannon and Donna Weiss song "Bette Davis Eyes". As the first single released from the album Mistaken Identity, it spent 9 weeks at number one on the US singles charts and became a worldwide hit. The single went on to become the #1 bestseller for the year and won Grammy Awards for Song of the Year and Record of the Year. It is second only to Olivia Newton-John's "Physical" (released later in 1981 and late enough to be the number one single of 1982), which spent 10 weeks at number one, as the biggest hit of the entire decade of the 1980s.

It is ironic that Carnes' best known and most popular song "Bette Davis Eyes" written in 1974 was originally rejected by Carnes. It was only after a new instrumental arrangement was done by Bill Cuomo that Carnes agreed to record it and it became a huge hit. Bette Davis admitted to being a fan of the song and approached Carnes and the songwriters to thank them. Davis wrote to Carnes after the song was released and stated that she was very pleased with the song as it made her seem very up to date with her grandson. She had Carnes sing the song live for her at a tribute held just before her death.

Carnes continued to record and released several albums into the 1990s. These releases failed to reach the level of success of "Bette Davis Eyes", but by this time she was a highly respected songwriter, and collaborated with such artists as Barbra Streisand. Carnes has written three number one country songs: ?The Heart Won't Lie?, a hit duet for Reba McEntire and Vince Gill, ?Don't Fall In Love With A Dreamer?, a huge hit duet she performed with Kenny Rogers, and ?Make No Mistake She's Mine?, a duet performed by Kenny Rogers and Ronnie Milsap. The latter song was originally "Make No Mistake, He's Mine," a No. 51 Pop hit in 1984 for Carnes and Streisand featured on Streisand's album Emotion. Also in 1984, Carnes sang on the No. 1 Adult Contemporary hit "What About Me?" with Rogers and James Ingram.

Co-writing with others, Carnes has had songs covered by such country stars as Deana Carter, Kevin Sharp, Sawyer Brown, Suzy Bogguss, Pam Tillis and Tanya Tucker. She wrote "You Don't Love Me Anymore," a hit song on Tim McGraw's album A Place In The Sun.

In 2004, she re-appeared with a self-released album Chasin' Wild Trains.

In August 2005, her 1981 single ?Draw Of The Cards? hit #1 on the internet radio request site FreezeFrameRadio.com.

She currently resides in Nashville, Tennessee.

Checkin' Out The Ghosts

View From The House