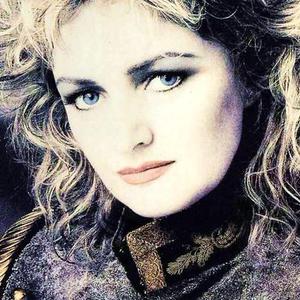 Bonnie Tyler (born Gaynor Hopkins on 8 June 1951- Skewen, Wales, United Kingdom) is a Welsh singer/songwriter, most notable for her hits in the 1970s and 1980s including "It's a Heartache", "Holding Out for a Hero" and "Total Eclipse of the Heart". Tyler is a three-time Grammy Award nominee, Brit Award nominee in 1984 and 1986 for Best British Female and three-time Goldene Europa award winner. She became the first western artist to tour the Soviet Union.

Born into a family that included three sisters and two brothers. Her father, Glyn Hopkins, worked in a coal mine and her mother, Elsie Hopkins, (an opera lover) shared her love for music with her children, and was known to have been part of the local church choir. Tyler grew up listening to Motown music and female artists like Janis Joplin and Tina Turner. She concluded her education in the sixties and began working in the local grocery shop, then as a supermarket cashier.

In 1975 Tyler recorded her first single for RCA Records called "My My Honeycomb" that failed to make the charts. Her second single "Lost in France", was a whimsical melody with lyrics that demonstrated how seemingly meaningless words on paper can be rich with meaning in song. The record showcased the potential of her powerful voice and reached the top 10 of the British pop music charts. When it was released later in Europe, it became an even bigger hit. Over the ensuing decades, the song has become one of the favorites of her fans.

Her success with "Lost in France" led Tyler to record her first album in 1977. Titled The World Starts Tonight, it met with only modest success, but it did well enough that she could tour throughout Europe. Prior to the album's release, Tyler underwent surgery to remove nodules on her vocal cords. Against doctor's orders, she spoke before she had healed, with the result that her singing voice took on a raspy quality. At first, this made Tyler believe her singing career was over. As it turned out, her next single, where she used all of her husky voice's power, made her an international star. The song "It's a Heartache", from her second album Natural Force, reached the top 5 in Britain, Europe, and in the United States, leading to her first American tour. The song "Sitting on the Edge of the Ocean", again written by Scott and Wolfe, won the Grand Prix in the Tenth Yamaha - World Popular Song Festival in Tokyo in 1979.

Following this success, her ensuing recordings were met with only moderate acceptance, but things changed when she signed with CBS Records in 1982. Her album, Faster Than the Speed of Night proved an international blockbuster and the single "Total Eclipse of the Heart", written by Jim Steinman, topped the charts worldwide, remaining at No. 1 for several weeks. "Faster Than the Speed of Night" shot straight into the UK album charts at No.1, making Bonnie the first ever female artist to have achieved this, earning a Guinness Record. The album is regarded by rock connoisseurs as an operatic masterpiece with its thundering Tchaikovskyesque cannons. The song brought Tyler a 1983 nomination for the Grammy Award for Best Female Pop Vocal Performance and the album "Faster Than The Speed Of Night" earned her another Grammy nomination for Best Female Rock Vocal Performance. At the 1984 Academy Award show, Tyler's stirring rendition of "Total Eclipse" brought down the house at what until that point has since been referred to as one of the dullest award shows in history. That same year, she again received a Grammy nomination as best Rock Female Vocalist for the song "Here She Comes," a song that was part of the soundtrack for the 1984 restoration of the film Metropolis.

In 1984 she had another major success with the single "Holding Out for a Hero", followed albums "Secret Dreams And Forbidden Fire" and "Hide Your Heart". In the early 1990s, Tyler recorded the European hit album, "Bitterblue. This album went quadruple-platinum in Norway, platinum in Austria and gold in Germany, Switzerland and Sweden, amongst other countries. Its success was repeated with the "Angel Heart album". "Silhouette In Red", released in 1993, saw Tyler win Best International Female Vocalist in the German Music Awards. After that, her live performances continued to draw large followings, but her recordings met with limited market success until the young French singer Kareen Antonn approached her to record a duet. "Si Demain", their French language version of "Total Eclipse of the Heart", was released in January 2004 and went to No. 1 in France, Belgium, and Poland. The single achieved million selling status in Europe. The single was followed up by two album releases in France and selected parts of Europe, "Simply Believe" and "Wings", before she released her first ever full length live concert CD titled "Bonnie Tyler live" in 2006 shortly after a respective DVD.

Bonnie Tyler has maintained a home in Mumbles in South Wales for many years but spends the better part of the year at her place in the Algarve in Portugal.

Total Eclipse Of The Heart

The Best Is Yet To Come

Between the Earth and the Stars