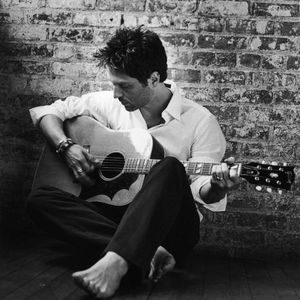 Richard Noel Marx (born September 16, 1963 in Chicago, Illinois) is an adult contemporary singer and songwriter. He had a string of successful hit singles in the late 1980s and early 1990s, including "Right Here Waiting," "Hazard," and "Hold On To The Nights." Although most of his successful songs were slow ballads like these, many of his songs had an upbeat, classic rock style, such as "Don't Mean Nothing," "Should've Known Better," "Satisfied," and "Wait For The Sunrise.

Marx placed himself in the record books by being the first solo artist to have his first seven singles hit the top 5 on the US charts.

Marx was born to Dick and Ruth Marx. Marx grew up in a mixed faith household where father was Jewish and his mother was a Christian. His father was a jingle writer for commercials, which is where Marx got his start writing at the tender age of five. His father also was talented jazz musician, well-known in the Chicago area.

At the age of 17 Marx created a demo to showcase his talents, which landed in the hands of Lionel Richie. Richie invited Marx to Hollywood saying, "I can't promise you anything, but you should come to L.A." Marx would eventually appear as a background singer in Richie's songs "You Are," "Running With The Night," and on his follow-up album including the smash hit "All Night Long".

*Richard Marx*
Marx's first self titled album went multi-platinum, selling nearly 4 million copies. He earned his first #1 single, "Hold On To The Nights", which he told Songfacts.com was inspired by a friend who had the dilemma of having met the love of his life, at a time when both he and the girl in question were already in relationships. He also had several other top five hits including "Don&rsquo;t Mean Nothing" (#3), "Should've Known Better" (#3) and "Endless Summer Nights" (#2).
He revealed in an interview on VH-1 Classic that his favorite song that he performed from his first, self-titled album was "Have Mercy."

Richard Marx also sang with Donna Lewis, best known for her hit "I Love You Always Forever", on the track "At the Beginning" of the Anastasia soundtrack. He has sung background vocals for Madonna in her True Blue album.

Marx has been married to Cynthia Rhodes, who starred in the 1987 blockbuster Dirty Dancing and is a former lead singer for 80s pop band Animotion, since 1989. The couple has three sons: Brandon, Lucas, and Jesse. Brandon is the eldest followed by Lucas then Jesse.

One of Marx's most recent works is a song titled "Remember When", composed to celebrate the 50th anniversary of Disneyland. Performed by LeAnn Rimes, the song may be heard on the park's official 50th Anniversary album, as well as selected times in the park.

Inside My Head CD2

Inside My Head CD1