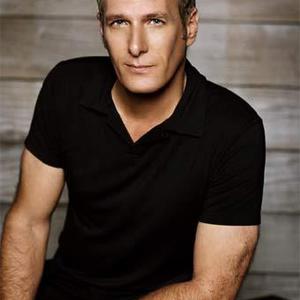 Michael Bolton (born Michael Bolotin on February 26, 1953), is an American singer-songwriter, best known for his soft rock ballads and powerful high baritone/baritenor vocals, with deep and husky higher singing. He was born in New Haven, Connecticut. His achievements include selling 53 million albums, eight top ten albums, two number one singles on the Billboard charts, and awards from both the American Music Awards and Grammy Awards.

His achievements include selling 53 million albums, eight top ten albums, two number one singles on the Billboard charts, and awards from both the American Music Awards and Grammy Awards.

Michael Bolton had an extensive, though not very successful, career under his real name, Michael Bolotin, before emerging in the mid-'80s as a major soft rock balladeer. Bolton began recording in 1975. This first album was self-titled using his original surname, Bolotin. Early in his musical career, he focused on hard rock. His band, Blackjack, once toured with heavy metal singer Ozzy Osbourne. He turned up on RCA Records in the mid-'70s singing in a gruff, Joe Cocker-like voice both his own blue-eyed soul songs and cover tunes. Neither record buyers nor critics were much interested by the result. He then became the lead singer in Blackjack, a heavy metal band that made two albums for Polydor at the end of the '70s and the start of the '80s. In 1983, he changed his name to Michael Bolton, signed to Columbia Records as a solo act, and relaunched his career.

Michael Bolton was released in April 1983, and made the Top 100 bestsellers, as did its single, "Fools Game." At the same time, "How Am I Supposed to Live Without You," which Bolton had co-written, became a Top 40 hit for Laura Branigan. Nevertheless, Bolton's second Columbia album, Everybody's Crazy (1985), was a commercial flop. His breakthrough came with his third album, The Hunger, released in September 1987. On this album, Bolton abandoned the more hard rock aspects of his style to concentrate on blue-eyed soul singing: both on his own songs, such as "That's What Love Is All About," and on covers like Otis Redding's "(Sittin' On) The Dock of the Bay." Those two songs became Top 40 hits.

Soul Provider, released in July 1989, turned Bolton into a superstar, reaching the Top Ten, selling four million copies, and spawning five Top 40 singles, including Bolton's number one version of "How Am I Supposed to Live Without You," and the Top Ten hits "How Can We Be Lovers" and "When I'm Back on My Feet Again." "How Am I Supposed to Live Without You" won Bolton a Grammy Award for Best Male Pop Vocal Performance. Time, Love & Tenderness, released in April 1991, was even more successful, hitting number one, selling six million copies, and featuring four Top 40 hits, including the chart-topping cover of Percy Sledge's "When a Man Loves a Woman," and the Top Ten hits "Love Is a Wonderful Thing" (later the subject of a successful plagiarism suit brought against Bolton by the Isley Brothers) and "Time, Love and Tenderness."

Bolton won another Grammy Award for Best Male Pop Vocal Performance, for "When a Man Loves a Woman," but he had to put up with abuse from two camps of detractors at the February 1992 ceremony. Just after Bolton had performed, pre-rock songwriter Irving Gordon won the Song of the Year award for "Unforgettable" and pointedly attacked songs that "scream, yell, and have a nervous breakdown" and singers who "have a hernia" when they sing. Then, backstage, Bolton faced a hostile press corps of critics unhappy with his tendency to copy great soul singers like Redding, Ray Charles, and Sledge. Bolton suggested they apply their lips to a certain part of his anatomy. He further responded with Timeless: The Classics in September 1992, an album made up entirely of cover songs. It went to number one, sold three million copies, and featured a Top 40 hit in Bolton's version of the Bee Gees' "To Love Somebody." Bolton's next album of original material, The One Thing, came in November 1993. It hit the Top Ten, sold three million copies, and featured the Top Ten hit "Said I Loved You...But I Lied." Bolton released Greatest Hits 1985-1995 in the fall of 1995, which debuted in the Top Ten. The following year, This Is the Time: Christmas Album appeared.

Bolton returned with All That Matters, his first album of new material since 1993's The One Thing, in the fall of 1997. Instead of continuing his success, it was a surprise flop. Not only did it not generate a hit single, it barely cracked the Top 40 and fell out of the charts after 15 weeks. Its lack of success didn't stop Bolton from turning his attention to My Secret Passion, a collection of opera and arias that he released in January 1998. By classical standards, the album was a hit, and the record received a great deal of press and surprisingly good reviews. He supported the two albums with a summer tour which were co-headlined with Wynonna Judd. He voluntarily stepped back for almost four years, disappearing from the public eye until the spring of 2002 when he began promoting Only a Woman Like You, his first album on Jive Records. After a brief sabbatical, he returned with Til the End of Forever, a hybrid new album of seven new recordings and a live greatest-hits concert. In 2006 he released Bolton Swings Sinatra, a 12-song tribute to Ol' Blue Eyes that included a duet with fianc?e/actress Nicolette Sheridan.

It would be worth mentioning "Can I Touch You There" proved to be one of the all-time hit love songs from Micheal Bolton from the album Greatest Hits.

A Symphony Of Hits

One World One Love