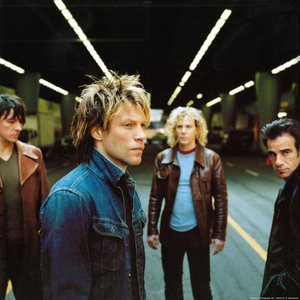 Bon Jovi is a hard rock band from Sayreville, New Jersey. Fronted by lead singer and namesake Jon Bon Jovi (born John Francis Bongiovi, Jr.), the group originally achieved large-scale success in the 1980s. Bon Jovi formed in 1983 with lead singer Jon Bon Jovi, guitarist Richie Sambora, keyboardist David Bryan, bassist Alec John Such, and drummer Tico Torres. Other than the departure of Alec John Such in 1994 (which pared the lineup down to a quartet), the lineup has remained the same for the past 27 years.

Bon Jovi formed in 1983 with lead singer Jon Bon Jovi, guitarist Richie Sambora, keyboardist David Bryan, bassist Alec John Such, and drummer Tico Torres. Other than the departure of Alec John Such in 1994 (which pared the lineup down to a quartet), the lineup has remained the same for the past 27 years.

After two moderately successful albums in 1984 and 1985, the band scored big with Slippery When Wet (1986) and New Jersey (1988), which sold a combined 19 million copies in the U.S. alone, charted eight Top Ten hits, and launched the band into global superstardom. After non-stop touring, the band went on hiatus after the New Jersey Tour in 1990, during which time Jon Bon Jovi and Richie Sambora both released successful solo albums. In 1992, the band returned with the double platinum Keep The Faith and has since created a string of platinum albums throughout the 1990s and 2000s, also expanding their musical horizons, combining rock with such genres as pop, adult contemporary, and country. The band has also been credited with inspiring the MTV Unplugged series with their famous sit-down acoustic performance at the 1989 MTV Video Music Awards.

In 2006, the band won a Grammy for best Country Collaboration for "Who Says You Can't Go Home" with Jennifer Nettles from Sugarland and also became the first rock band to reach #1 on the Hot Country Songs chart with the same song. They have also been nominated twice for the smash hit "It's My Life" and two songs from the album Bounce, "Misunderstood" and "Everyday".

Throughout their career, the band has released ten studio albums, of which nine have gone platinum. In addition, the band has charted 19 singles to the Top 40 of the Billboard Hot 100, four of which reached #1 ("You Give Love a Bad Name", "Livin' On A Prayer", "Bad Medicine", and "I'll Be There For You"). The band also holds the record for the most weeks for a hard rock album at #1 on the billboard 200 with Slippery When Wet, as well as the most Top 10 singles from a hard rock album, with New Jersey, which charted five such singles.

On November 2nd 2009 Bon Jovi released their 11th studio album and it is called: The Circle. The first single off the album is slated to hit radio on August 31st and is called "We Weren't Born To Follow". A tour to promote this album will be annouced soon on www.bonjovi.com. All this info has been confirmed by Bon Jovi's engineer Obie O'brien.

Over the past 25 years, Bon Jovi has sold over 120 million albums worldwide, 34 million in the United States alone.

This House Is Not For Sale (Expanded)