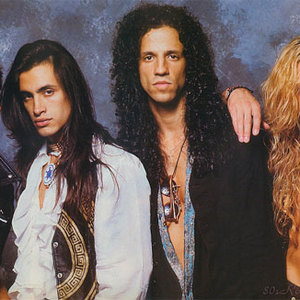 Extreme is a rock band consisting of singer/guitar virtuoso Nuno Bettencourt, singer/lyricist Gary Cherone, bassist/singer Pat Badger and drummer Kevin Figueiredo. The band first formed in 1985 in Boston with then drummer Paul Geary (who later got replaced by drummer Mike Mangini) until the band decided to go on an indefinite hiatus that ended up lasting more than 10 years (1996 - 2006). The band's influences range from the progressive hard rock and elaborate multi-vocals parts of Queen, the energy of Aerosmith and Van Halen, as well as Beatlesque pop and a Led Zeppelin organic feeling.

Consequently, Extreme's music is never easy to classify; it's not just heavy metal, hard rock, or pop ?their albums cover all of that territory with a sweeping ambition and a social consciousness to match. Although a hard rock band, it was the Everly Brothers-style acoustic ballad, "More Than Words," that crossed them over into the mainstream ? it hit number one and the follow-up single, the acoustic-based pop rocker "Hole Hearted," hit number four.

They released two albums in the hey day of glam metal but received diminished attention from the mainstream following the grunge explosion following the release of Nirvana's "Nevermind" in 1991. Despite this, they released two more albums before the hiatus. Vocalist Gary Cherone went on to join Van Halen in 1997, replacing Sammy Hagar, and the group released "Van Halen III." He left Van Halen soon after, in 1999 and formed Tribe of Judah, with fellow Extreme members Pat Badger and Mike Mangini.

The group reformed in 2004 for a short tour of Boston and Japan, as well as reforming in 2006 for a small US tour.

The Third Side Live

An Accidental Collision Of Atoms (The Best Of)

There Is No God