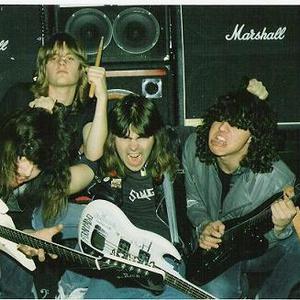 There are at least three artists named Slaughter on last.fm: 1. A glam rock band from the United States popular in the 1980's 2. A thrash/death metal band from Canada 3. A heavy metal band from France 1) Slaughter first formed in Las Vegas, NV. at the height of glam metal's dominance over MTV and rock radio. Achieving popularity at the tail end of the movement, Slaughter's day in the spotlight proved to be bright but fickle and brief. They have, however, continued to record and tour.

1) Slaughter first formed in Las Vegas, NV. at the height of glam metal's dominance over MTV and rock radio. Achieving popularity at the tail end of the movement, Slaughter's day in the spotlight proved to be bright but fickle and brief. They have, however, continued to record and tour.

The band formed in 1988 with Mark Slaughter on vocals, Dana Strum as bassist, Tim Kelly on guitars and Blas Elias on drums. Mark Slaughter and Dana Strum had previously played together in Vinnie Vincent Invasion. Their debut album Stick It To Ya saw 3 songs hit the Billboard Hot 100: "Fly To the Angels (#19)", "Up All Night (#27)", and "Spend My Life (#39)".

Unlike many of the bands from the era who were suddenly phased out in the wake of the alternative movement, Slaughter remained intact and continued to produce new records. In 1992, the released their second album, titled The Wild Life. It had the Billboard Hot 100 hit "Real Love (#69)" and was certified platinum.

The band planned to dedicate themselves to their next album. However, in 1993 guitarist Tim Kelly was arrested for charges of drug trafficking, while bassist Dana Strum had a motorcycle accident that injured his playing hand. This delayed the recording of the album, but they kept working on it while Kelly was meeting with attorneys and Strum was rehabilitating. They finished the recording on February 1994 when Strum was completely rehabilitated.

At this time, they negotiated to be released from their label and signed with CMC Records. In 1995, they finally released Fear No Evil. Despite little success in the US, the album did well in Japan. Guitarist Dave Marshall (ex-Vince Neil band) had to fill in for Kelly at times, due to his legal problems.

Some time later, Kelly's legal troubles ended and the band committed to their next album. In 1997, they followed it with Revolution. This album featured a more eclectic and psychedelic sound, but again it was mostly ignored by the media.

In February 5, 1998, tragedy struck when guitarist Tim Kelly was killed in an auto accident in the Arizona desert. This deeply affected the band, but they were committed to continue with the band. Again, guitarist Dave Marshall briefly performed as a touring guitarist for Slaughter in Japan. In 1999, they hired Jeff Blando as Kelly's replacement and began working on their next album. A live album titled Eternal Live was released featuring some of the band's last performances with Kelly.

In 1999, they resurged with Back to Reality, featuring Blando as the new guitarist. Blando was previously in Left For Dead and Saigon Kick. Since then, Slaughter continues to play many rock package tours with other acts that saw prominence during the glam era of the late 1980s and very early 1990s.

During the summer of 1999, while on the "Rock Never Stops Tour" (which included Ted Nugent and Night Ranger), Slaughter enjoyed a brief commercial resurgence, and had the "#1 Track" on the "VH-1" CD "Power Ballads" with "Fly To The Angels" and "Up All Night" became the "#1 Track" on Rhino Records "Hard Hitters," and also took part in the Summer 2000 "Poison, Cinderella, Dokken and Slaughter" tour.

In 2001 Slaughter was a part of the "Voices of Metal" tour featuring Vince Neil (of M&ouml;tley Cr&uuml;e), Ratt, and Vixen.

Mark Slaughter and Dana Strum's former Vinnie Vincent Invasion bandmate Bobby Rock has played as a touring drummer for Slaughter, filling in for Blas Elias on some shows of the Rock Never Stops Tour.

In April of 2004, Slaughter released a DVD-A entitled Then and Now that features 12 songs and 50 rare photos of the band over the years. Slaughter will also have a DVD that features all of the music videos and behind the scenes footage during the 2004 season.

-------------
2) Slaughter was a Canadian death/thrash metal band. They were formed in Toronto, Ontario, Canada in 1984 and briefly featured Chuck Schuldiner on guitar in 1986. Originally, they released one full-length and several demos. Slaughter was disbanded from 1989 to 1995 but returned in 1996 to record a cover of Celtic Frost's ?Dethroned Emperor? for a tribute album called ?In Memory of Celtic Frost?. They then re-released ?Strappado? and a new album called Not Dead Yet/Paranormal under the Nuclear Blast record label in 2001. The band has been inactive again since 2001.

Mass Slaughter: The Best Of Slaughter

Fly To The Angels