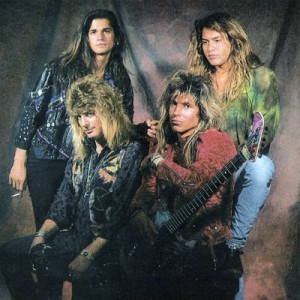 Lynch Mob are the current vehicle for former Dokken guitarist George Lynch, who has been the band's only permanent member. The band was formed in California, United States in 1989 shortly after Lynch quit Dokken. The band's line-up has been a revolving door of members who have come and gone, and in some cases returned. The band's debut album, featuring vocalist Oni Logan (ex-Cold Sweat), Wicked Sensation (1990) was praised by many fans as a great rock album.

Despite poor sales, many felt that if it had been recorded a few years earlier it would have sold very well, and maybe even hit number one.

1992's self-titled follow up Lynch Mob featured new vocalist Robert Mason in Logan's place, but in the wake of even poorer sales figures the group disbanded in 1993.

Lynch spent the mid 90s in a reunited Dokken line-up, but by 1998 he had once again quit Dokken and was working on a new rap-metal version of Lynch Mob. 1999's Smoke This was poorly received, prompting another split.

In 2003, Lynch, Mason and original bassist Anthony Esposito reformed yet another incarnation of Lynch Mob, this time updating their original sound rather than follow the rap-metal direction of the late 90s iteration of the band.

This line-up didn't last long, and Lynch soon turned his attention to solo albums and his band with former Brides of Destruction singer London LeGrand, Souls Of We.

In 2008, the original line-up of Dokken was slated to play Rocklahoma, but when the reunion fell through Lynch used the opportunity to reunite Lynch Mob with original vocalist Oni Logan.

The album Smoke and Mirrors was released in 2009, with Lynch and Logan describing it as the proper follow-up to Wicked Sensation.

In July 2011, when Lynch Mob was set to embark on a US tour, Logan suddenly quit the band. Chas West (ex-Bonham) was quickly brought in to finish the tour.