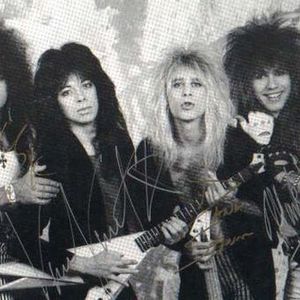 He recorded some demos with one time Journey front man Robert Fleischman, a singer he had worked with in Warrior prior to his stint in Kiss. Chrysalis records loved what they heard and signed the Invasion to an eight album, $4 million dollar contract. So along with bassist Dana Strum and drummer Bob Rock they started recording the debut album.
The album was an instant success as it climbed into the Billboard Top 100. However Fleischman refused to adopt the outrageous glam image, and showed no desire to tour. The Invasion was forced to find a new vocalist, and they decided on Mark Slaughter. But there was tension between Vincent and Slaughter from day one, which intensified even more when new record label management wanted Slaughter to become focal point of the group! The follow-up album had some success, but internal turmoil killed the band in late 1988 at the end of their one-month tour.
Vincent recorded a third Invasion album with Fleischman, but it never saw the light of day, and he has remained out of the limelight and recorded sporadically ever since. Rock went on to fame with Nelson, while Slaughter and Strum formed Slaughter and reached platinum success.