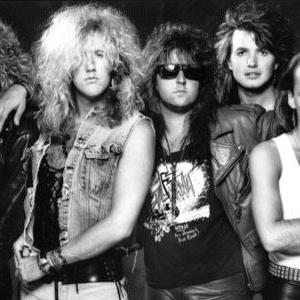 Black 'N Blue was a Heavy Metal band that was labeled to be the "next big thing" in the mid 80's, but despite having a loyal fan base, they never broke through commercially. The group was formed by Jaime St. James (vocals), Tommy Thayer (guitar), Jeff Warner (guitar), Patrick Young (bass) and Pete Holmes (drums) in Portland, Oregon in 1981. By relocating to Los Angeles, they made their debut on the first Metal Massacre compilation with the song "Chains Around Heaven", before landing a major label deal.

The band opened for Kiss in 1985, and was able to reach a much larger audience, yet it failed to translate into sales for the boys. Kiss' Gene Simmons even produced the Nasty Nasty (1986) and In Heat (1988) albums, but even that couldn't sell the band to the public, and by 1989 the group had disbanded. Lack of a hit single seemed to be the missing ingredient for this hard rocking quintet. By opening for some of the biggest names in the metal scene, the band was able to sell roughly a million units of their albums, but with expectations so high that just wasn't enough.
Since the groups demise, St. James has recorded with Freight Train Jane, Dry Rot and St. James. Thayer went on to record with Doro, Harlow and Shake The Faith. Holmes would form Monster with some ex-Malice members.
Black 'N Blue reformed in 1997 for a show that would be recorded and released as One Night Only - Live. The band would once again reform in 2003, with Shawn Sonnenschein filling in for Thayer (who is currently playing the Space Ace in Kiss); to work on a new album due for release called Hell Yeah! A big break came to St. James in 2004 when he replaced Jani Lane as the front man for multi-platinum rockers Warrant. Black 'N Blue is another band that just didn't get the recognition they deserved.

One Night Only (Live)