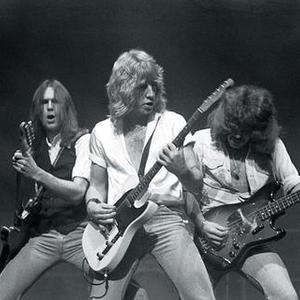 Status Quo are a british rock band (London, England) with strong boogie line. The group was founded by bassist Alan Lancaster and guitarist Francis Rossi in 1962. They began as a rock and roll freakbeat band called The Spectres. By 1967, with very little commercial success, they discovered psychedelia and changed their name to Traffic (later Traffic Jam, to avoid confusion with Steve Winwood's Traffic.) At this time the line-up also included organist Roy Lynes and drummer John Coghlan.

They began as a rock and roll freakbeat band called The Spectres. By 1967, with very little commercial success, they discovered psychedelia and changed their name to Traffic (later Traffic Jam, to avoid confusion with Steve Winwood's Traffic.) At this time the line-up also included organist Roy Lynes and drummer John Coghlan. Late in 1967 they recruited second guitarist Rick Parfitt and became The Status Quo, scoring Top 10 singles with Pictures Of Matchstick Men and Ice In The Sun. "Pictures of Matchstick Men" remains the only Top 40 hit single the group has ever charted in the United States. They have never achieved the same level of success there, that they have enjoyed in their home country.

After their second album Spare Parts they decided to change into a heavy boogie rock band. During the seventies they became one of the UK's leading rock bands, gaining a faithful following due to their excellent live gigs. They showed a great amount of energy during this decade and in the early 80s. They and are best known for songs from this era such as Paper Plane (1972), Caroline (1973), Down Down (1975), John Fogerty's Rockin' All Over The World (1977) and Whatever You Want (1979). Down Down topped the UK charts in January 1975 (their only British No. 1 single to date).

Lynes left in 1971, to be replaced initially by guest keyboard players on album, including Jimmy Horowitz and John Parker, and later on a more permanent basis on record and stage by ex-The Herd and Judas Jump member Andy Bown, though as he was contracted as a solo artist with EMI, he was not credited as a full-time member until 1982. Coghlan left in late 1981, to be replaced by Pete Kircher from 1960s band Honeybus. This short-lived lineup played its last gig in 1984 at the Milton Keynes Bowl, and reformed briefly to open the Live Aid charity event at Wembley in July 1985.

That year Rossi recorded and released two solo singles with longtime writing partner Bernie Frost. Parfitt was also working on a solo album which is still unreleased, although some tracks have been re-recorded by Status Quo and released as 'B' sides. Bass player John Edwards and drummer Jeff Rich, both ex-Judie Tzuke Band and Climax Blues Band, assisted Parfitt in the studio.

In the summer of 1985 Rossi, Parfitt and Bown, along with Edwards and Rich started work on a new album. Lancaster, who was living in Australia at the time, took out a legal injunction to stop the band using the Status Quo name on any records. The injunction was lifted after a court hearing in January 1986. Lancaster had had increasing musical differences with the group, notably during the sessions for the 1983 album Back To Back over two tracks which became hit singles for the group around that time. He had written Ol' Rag Blues, but was angered when the producers chose to release a version with Rossi singing lead vocal in preference to the one sung by himself, and he objected to Marguerita Time, which he thought unduly corny and too pop-oriented for them. He remained in Australia, forming a band called Party Boys, who had no success in Britain.

The commercially successful In The Army Now album was released in 1986, and the band continues to this day with the revised personnel. Rich left in 2000 and was replaced by Matthew Letley. Andrew Bown took a year off at the same time for family reasons and was replaced on stage by Paul Hirsh, formerly of Voyager.

According to Songfacts.com, Quo's 29th studio album, Quid Pro Quo, was released in a deluxe format exclusively at Tesco on 30 May 2011. The regular edition was released elsewhere a week later on 7th June. The LP debuted at #10 in the UK charts, the band's best chart placing for an original album since Don't Stop peaked at #2 in 1996.

Although Quo still release new material every few years, recent years have seen them release a series of greatest hits compilations and covers albums. One of the band's most recent original albums, [album artist=Status Quo]Heavy Traffic, shows a return to classic form not seen since the late 1970s.

Status Quo have often been characterized, perhaps unfairly, as producing very simple songs, always in the same format: 4/4 rhythm, three chord structure. However, the recordings from their first decade demonstrate a diversity in musical style and complexity to rival most of the late 60s UK bands, and several of their singles and album tracks from later show considerable subtlety, not least the mainly acoustic 1979 single Living On An Island, and the 1980 album track, later a single, Rock'N'Roll, which is ironically one of the least rock'n'roll-like songs they have ever recorded.

They have a loyal group of fans in the United Kingdom, where they have enjoyed more hits than any other group in rock and roll history (over 60 as of mid-2005), as well as a big following in Europe, notably in The Netherlands.

In September 2005 a contestant on the long-running BBC television quiz programme Mastermind chose Status Quo as his specialist subject. That same year they took part in the long running ITV soap opera Coronation Street in a storyline which involved them being sued by the layabout Les Battersby.

In December 2005 it was announced that Parfitt was undergoing tests for throat cancer. All subsequent dates of the UK tour were cancelled as a result. However on 20th December it was further announced that the growths found in Parfitt's throat were benign and had been removed.

Quo have even been the subject of a Doctoral Thesis, purporting to demonstrate that their music composition skills could be favourably compared to the likes of the classical music composers, such as Beethoven!

Down Down & Dignified At The Royal Albert Hall

Down Down & Dirty At Wacken (Live)