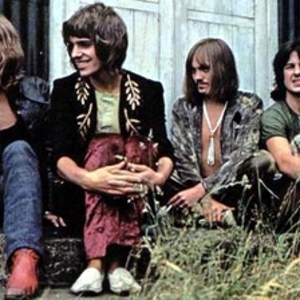 Humble Pie was a British rock music band from 1969-82, best known for its hard-rocking recordings and concert performances during their peak period on A&M records from 1970-1975. The band initially consisted in 1969 of Steve Marriott (formerly of Small Faces; lead vocals, guitar, keyboards), Peter Frampton (from The Herd; lead guitar), Greg Ridley (from Spooky Tooth; bass) and Jerry Shirley (from Valkyrie; drums).

The joining of all these fairly known players resulted in Humble Pie being considered a bit of a ?supergroup?. Worried about great expectations, the group began working together in secret at Marriott's cottage in Moreton, Essex. Signed to Andrew Loog Oldham's Immediate Records, their debut single "Natural Born Boogie" was rushed out in 1969 and was a UK number five hit; it was quickly followed by the album As Safe As Yesterday Is, praised as a progressive album in the vein of Small Faces. Their second album Town And Country was also released in 1969 and featured a more acoustic sound. Humble Pie concerts at this time featured an acoustic set followed by an electric set, an approach that would become popular decades later.

1970 saw the financial collapse of Immediate, a switch to A&M Records, and a change in band management. The albums Humble Pie and Rock On, both released that year, alternated between progressive rock and boogie rock excess. A concert at the Fillmore East in NYC was captured on Perfomance Rockin' The Fillmore (1971); it is considered one of the best live rock albums of its era, with Marriott, Frampton, and the rest of the group in fine form. The loud-quiet-loud epic "I Don't Need No Doctor" was an FM radio hit in the United States, propelling the album to the group's biggest commercial success yet.

However, Frampton had already left the band by the time of the album's release, to pursue a solo career that would become extremely successful later in the 1970s. With Dave "Clem" Clempson replacing Frampton, Humble Pie moved towards an even harder sound at the urging of manager Dee Anthony, emphasizing Marriott's blues and soul roots.

Smokin' (1972) had a minor hit in "Thirty Days in the Hole" and was reasonably successful commercially based on the group's constant touring. As a premiere US concert attraction, they traveled in a customized private jet, and partook in all forms of the rock n roll excess available to formerly working class musicians that rose to fame and riches in this era, even hiring The Blackberries, a trio of black backup singers including Vanetta Fields formerly of The Ikettes. Nevertheless the band's extended, long form concert boogie jam rock style was unable to break them into the mainstream radio. Eat It (1974) was three sides of mostly R&B covers and one side live, and while appreciated by their core fans, did nothing to expand the group's audience. The group staged the Goodbye Pie Tour in 1975 and essentially broke up.

In 1980 Marriott, divorced, and with financial problems in the UK, relocated to Atlanta Georgia and revived Humble Pie with Shirley, adding Bob Tench (from Jeff Beck Group) on guitar and Anthony "Sooty" Jones on bass. Two albums with a more modern heavy metal sound were released but the effort soon fell apart. In 1991 Marriott and Frampton began collaborating again, with another Humble Pie rebirth possibly in the offing, but an unfortunate house fire took Marriott's life before anything tangible could materialise.