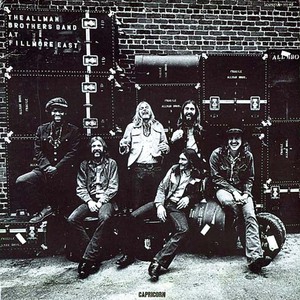 The Allman Brothers Band, formed in 1969 in Macon, Georgia blended strains of southern rock music - Blues, R&B, Country, Jazz, and Gospel - into a flexible, jam-oriented style of Rock and Roll that reflected the emergence of the "New South" and set the style for Lynyrd Skynyrd, the Marshall Tucker Band, and countless other Southern rockers. Oddly - or eerily, some would say - the band's unusual string of untimely deaths has been repeated in other Southern-rock bands.

Through personal tragedy and turmoil, the Allman Brothers Band has endured and, though lacking the commercial clout of its early-'70s heyday, it remains highly respected and well received by legions of fans. Lead guitarist and band leader Duane Allman has been recognized as one of the greatest blues/rock guitarists in history, according to numerous polls.

Brothers Gregg Allman and Duane Allman were living in Daytona Beach, Florida, in 1960, and played in various bands until 1964, when they formed the Escorts, which became the Allman Joys in 1965. After their version of Willie Dixon's ?Spoonful? failed as a single, the two brothers and three other band members went to L.A., where they signed with Liberty Records as the Hourglass. They recorded two albums of outside material (Hourglass, 1967, and Power of Love, 1968) before heading to Muscle Shoals, Alabama, to record at Fame Studios. Liberty rejected the resulting tapes, and Duane and Gregg returned to Florida.

Soon after, the brothers joined the 31st of February, whose drummer was Butch Trucks. After recording an album, Gregg went back to L.A. to make good on the Liberty contract. (A 1973 Bold album called Duane and Gregg consisted of tapes made by the 31st of February.) Duane stayed in Jacksonville, where he began playing with the Second Coming, which included Dickey Betts and Berry Oakley, veterans of Tommy Roe and the Romans.

But before Duane became an established member of the Second Coming, Fame Studios owner Rick Hall asked him to return to Muscle Shoals to play lead guitar for a Wilson Pickett session. At Duane's suggestion, Pickett recorded Lennon and McCartney's ?Hey Jude.? Duane became Fame's primary session guitarist, recording over the next year with Aretha Franklin, King Curtis, Percy Sledge, Clarence Carter, and Arthur Conley, and signing with Fame Productions as a solo artist. He also collaborated with Eric Clapton on the Derek and the Dominos album which produced the classic ?Layla.?

At the urging of Atlantic Records vice president Jerry Wexler, Phil Walden bought the Fame contract, with the notion to build a band around Duane for his upstart Capricorn Records. Allman hired "Jaimoe" Jai Johanny Johanson, a Muscle Shoals drummer who had worked with Otis Redding, Percy Sledge,Joe Tex, and Clifton Chenier. He went back to Florida and reconvened Trucks, Oakley, Betts, and Gregg. Once assembled, the Allman Brothers Band moved to Macon, Georgia, where Walden was launching Capricorn. (In 1991 Trucks said of the group's long tenure with the label: ?We had grossed $40 million and woke up one day to realize our own manager [Phil Walden] had cheated us out of every cent.?) The Allman Brothers Band, the group's debut, was well received only in the South. After its release, Duane continued to play on sessions with Boz Scaggs, Laura Nyro, Otis Rush, Delaney and Bonnie, Ronnie Hawkins, and John Hammond. He appears with Eric Clapton on Derek and the Dominos' Layla. (His session work is collected on the two Anthology volumes.)

On the strength of the Allman Brothers' growing reputation as a live band, its second album sold well. In March 1971, four shows at New York's Fillmore East were recorded for release as a live double LP set in July. By the time the album reached the Top 10, the Allman Brothers Band was being hailed in print as ?America's best rock & roll group.? But on October 29, 1971, less than three months after At Fillmore East's release, Duane was killed in a motorcycle accident in Macon. The group played at his funeral and decided to continue without a new guitarist. Three songs on their next LP, Eat a Peach, had been recorded before Duane's death, and with live material from the Fillmore East concerts, the double LP was released in February, entered the chart in the Top 10, and rose to #4. In 1972, Oakley was killed in a motorcycle crash three blocks from the site of Duane's accident a year earlier.

Dickey Betts, by then the band's unofficial leader, wrote and sang ?Ramblin' Man,? the band's first and biggest hit single (#2, 1973); Brothers and Sisters went to #1, with Lamar Williams, a childhood friend of Jaimoe's, taking Oakley's place, and Chuck Leavell on keyboards. The first two albums, when reissued as Beginnings, more than doubled their original sales. The group returned to the road after two years. In Watkins Glen, New York, 600,000 people gathered in July 1973 for an all-day concert by the Allman Brothers Band, The Grateful Dead, and The Band. There was growing dissension in the group, however, as Gregg and Betts began to disagree over schedules and musical direction. In 1974 they each released a Top 20 solo album (Allman's Laid Back and Betts' Highway Call), and Allman formed the Gregg Allman Band with Johanson, Leavell, Williams, and others to tour and record The Gregg Allman Tour. The subsequent Allman Brothers Band album, Win, Lose or Draw (#5, 1975), sold well, but it was four years before the next album of new material; The Road Goes On Forever, a compilation, and Wipe the Windows, a live collection, were released in 1976. By 1975, Allman was involved in a tumultuous marriage to Cher (they divorced in 1979). They had a son, Elijah Blue, in 1977. Their 1977 LP, Allman and Woman: Two the Hard Way, was universally panned.

But the greatest blow to the group occurred in 1976, when Allman testified against Scooter Herring, his personal road manager, charged with dealing narcotics. Herring was subsequently sentenced to 75 years in prison (later reduced to two years on appeal). Allman's action, the others said, betrayed the fraternal loyalty that had sustained them: They vowed never to work with him again. The members pursued separate but at times intertwining paths. Betts formed Great Southern, duplicating the original Allman Brothers lineup with two guitars, two drums, bass, keyboards, and vocals. Only the group's first album charted in the Top 100. After Allman's disastrous duet LP with Cher, he regrouped the Gregg Allman Band, with no help from any former Brothers, and put out Playin' Up a Storm in 1977. The other members also remained active: Trucks studied music at Florida State University for two years and formed an experimental group, Trucks. Leavell, Williams, and Johanson, with guitarist Jimmy Nails, formed the fusion-oriented Sea Level. Later, Leavell returned to session work, notably with the Rolling Stones, with whom he has toured since 1989.

In 1978, the Allman Brothers Band regrouped for the first time. After Allman, Trucks, and Jaimoe joined Betts and Great Southern onstage in New York in 1978, Great Southern guitarist Dan Toler and bassist Rook Goldflies also joined the new Allman Brothers Band. Enlightened Rogues (#9, 1979) was certified gold within two weeks of its release. Two years later Brothers of the Road gave the group a minor hit single, ?Straight From the Heart.? The group broke up again in 1980. In 1983 Lamar Williams died of Agent Orange?related cancer. Betts recorded an album with theDickey Betts Band, and Allman released I'm No Angel (#30, 1987) with its #49 title track.

Regrouping yet again in 1989 with core members Allman, Betts, Jaimoe, and Trucks, the Allman Brothers Band took to the road. Dreams, a box set, compiles songs from 1966 to 1988. The group's recent albums and performances have attracted a new generation of fans who have come to appreciate the Allman Brothers as the root of much latter-day collegiate jam rock. There was renewed critical respect, as well, especially for Allman's singing and writing. Allman, who finally won his struggles with heroin and alcohol, has also acted, appearing in the film Rush and the syndicated TV series Superboy.

In 1995 the group was inducted into the Rock and Roll Hall of Fame and released 2nd Set. It received its first Grammy Award (for Best Rock Instrumental Performance) the next year, for ?Jessica.? Gregg Allman released his first solo recording in a decade with 1997's Searching for Simplicity, which opens with a remake of the Allman Brothers' classic blues ?Whipping Post.? Allman's solo anthology, One More Try, includes only eight previously released songs.

A series of personnel changes, and the occasional intramural ruckus, have kept the band in flux. In 1996, Warren Haynes and Allen Woody left to work full-time with their own project, the blues-rock trio Gov&rsquo;t Mule. Guitarist Jack Pearson, who cowrote Gregg Allman's epic ?Sailin' 'Cross the Devil's Sea,? and bassist Oteil Burbridge (Aquarium Rescue Unit) replaced them. Pearson's departure in 1999 made way for 20-year-old guitarist Derek Trucks, Butch's nephew, to join a band he had been sitting in with for years. In June 2000, Betts was ousted via fax from the band on the eve of a summer tour. Soon thereafter, he put together a new eight-piece band, touring as the Dickey Betts Band. Not long after that, Warren Haynes rejoined the Allman Brothers.

Upon inducting the Allman Brothers Band into the Rock & Roll Hall of Fame, Willie Nelson said:

"The Allman Brothers Band took what moved them and merged it into something unique that audiences love: a sound that redefined the direction of rock and roll, and opened the doors to a spirit of experimentation that continues in today's music.

"The Allman Brothers Band were and still are one of the most exciting live bands ever to hit the stage. They became road warriors with a vengeance and left devoted fans wherever they went. The ABB is a band that reflects so many of my sentiments about music: originality, a determination not be confined musically or stylistically but instead to forge your own way and make music that moves you, a devotion to the road, and understanding that beyond pleasing yourself as an artist, the only other consideration should be the people, the fans who come to hear you.

"And so with pleasure, I give you rock and roll's greatest jammin' blues band, the Allman Brothers Band!"