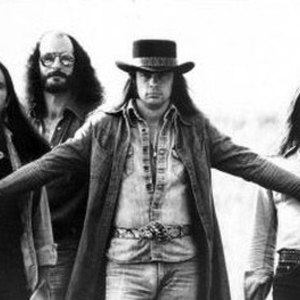 Blackfoot are a southern rock band from Jacksonville, Florida, United States. They were formed in 1972 and were contemporaries of Lynyrd Skynyrd, but with a harder rock sound. They had a number of hit albums in the 1970s and early 1980s before their popularity started to wane. They had broken up by 1985, though not before former Uriah Heep keyboardist/songwriter Ken Hensley had joined the group during their last couple of years together.

Vocalist Rickey Medlocke revived the name in 1987 with a new backing group and released three additional albums (Rick Medlocke And Blackfoot, Medicine Man, and After the Reign). In 1997, Medlocke disbanded the group, and joined Lynyrd Skynyrd.

In 2004 a second resurrection of Blackfoot took place with founding members Jackson Spires, Greg Walker, and Charlie Hargrett. Medlocke was not available, however, and the frontman role was given to Bobby Barth. Tragedy struck in March 2005 when Spires died suddenly of an aneurysm, but the band decided to persevere for the time being. Following the will of Spires, Austrian drummer Christoph Ullmann was hired as permanent drummer. In 2006, the band toured and was backed up by Jay Johnson on guitar and vocals. A live DVD was released in 2007. In 2007, the band was touring and consisted of bassist Greg Walker, guitarist Charlie Hargrett, guitarist and lead vocalist Bobby Barth, and drummer Michael Sollars. Currently Barth is unavailable due to illness and former Lynyrd Skynyrd guitarist Mike Estes is now vocalist.

On The Run (Live)