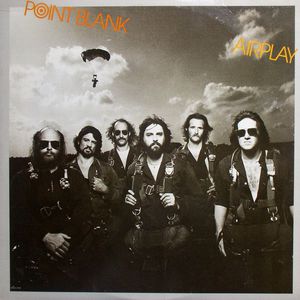 1) Point Blank is an American rock and roll band hailing from Texas. The band formed in 1974 and recorded six albums between 1976 and 1982. Garnering occasional airplay on AOR radio stations, the band is best known for their 1981 hit single "Nicole".

On their album 'Second Season' (imge provided) ... With the success of their eponymous debut recording, Point Blank had a reasonable amount of momentum heading into the studio to record Second Season. But rather than rearrange or pepper things up a bit in the recording process, Point Blank pretty much stayed the same as they did for their first record: a five-piece (they ditched the keyboardist) writing songs around crunchy blues guitar riffs that resemble a hybrid of British hard rock (Zeppelin, Deep Purple) and Southern rock. As a result, there really isn't much improvement over the first album (save for the removal of the cheesy, pun-infected cover art, replaced by the lads in the band "taking it easy" in the backyard, complete with yellow sunlit soft-focus photography). It's not the worst album in the Point Blank catalog, but it certainly isn't the best. For die-hard fans and Southern rock fanatics only. (Info via Castelar Blues: http://castelarblues.blogspot.com/2011/07/point-blank-second-sesson.html)

In 1982 Point Blank released their fourth album, "American Exce$$" which included the song Nicole. With strong air-play on AOR radio stations the track reached #20 on Billboard Magazine's Rock Tracks chart. Subsequently, Nicole was also released as a 45 RPM single and peaked inside the Top 40 at #39 on Billboard's Hot 100. While other songs received airplay and charted, this was the only time Point Blank placed a record inside the top 40, and thus the band are remembered by some as a one-hit wonder.

2) Point Blank "The Bull", a Houston, TX based rapper who is a member of the South Park Coalition (S.P.C.) and Wreckless Klan. He was born in Chicago, Illinois and moved to Houston's South Park neighborhood.


3)
We started playing somewhere in the end of 1999, under the influence of the hardcore wave that Macedonia was in. Everyone was playing hardcore, and so were we. But soon we've realized that simply hardcore was not us, although we liked the energy that playing hardcore produces. So our music started to change. No one was talking about changes but our telepathy worked. We started to make more complex and more melodic rock/metal songs, and the atmosphere in the band changed. Everybody started to behave more serious and more dedicated. We simply wanted to sound modern. At that point we've realized that POINT BLANK was no more some adolescent joke. Everyone in the band had experience with other bands before we started playing, but nothing like this. This was it. When we started playing, we were like 2 and a half years locked up in our garage making music and searching for our own sound. We simply wanted to be ready before our first performance. We were, and still are convinced that live acts are the most important thing that builds the band character, despite the recording sessions. So the time for our first gig came?Our first gig went the way every new band wanted, crowded, claustrophobic, and very hot. It all started after that? Recording studios, radio and TV shows, Festivals, Tours? The band members are: Blagoja Gigov ? Guitar Metodija Atanasovski ? Guitar Damjan Mitrevski ? Vocals Dimitri Trickovski ? Bass Vladimir Mitrevski ? Drums All five of us are together in the band since day one. We don't have changes in the band and we don't plan to do that because we're great together?We understand and respect each other very much, and besides that, we're friends like a 100 years. So that's our short story. We hope we didn't

4)One of Canada's most recognized groups in hip-hop, Point Blank continue to make long strides in the music industry. Comprised of 6 emcees and one in house producer - Imperial, Trouble, Stump, Kidd, RPD, Jackal and Pikihed - share a common goal and vision to be the voice of youth growing up in the inner city. All members were raised in Toronto, Ontario's infamous Regent Park - North America's Oldest Social Housing Project. Their recordings are a reflection of their experiences growing up in the impoverished neighborhood. As artists, they all have distinctive lyrical styles and deliveries reminiscent of classic hip-hop groups like Wu-Tang & Boot Camp. As a group, PB has performed alongside hip-hop legends such as Rakim , KRS-1 , Outkast and Mobb Deep . Their national success has allowed them to travel across the country and build a solid fan base of listeners and supporters.

Running as a crew since 1989, the members' first united in elementary school and formed a group called Poetic Vandals . In the early 90's, the group launched Tilt Rock Records , the imprint label they are currently signed to. After forming Tilt Rock Records, the group later re-named themselves to Point Blank, which represented their raw, to the point and bold attitude. Their lyrics speak of racial profiling, single parent households, poverty, community programs, crime, drug addiction, crooked politicians, police and other social issues surrounding youth growing up in government housing.

Members Trouble, Stump & Kidd are all brothers and Pikihed & RPD are also identical twins. These family ties have instilled a strong sense of family values and loyalty within the group. It has also bred a strong desire to see their families enjoy better living conditions and prosper .

In 1996 Point Blank released " Retaliation " on DJ X's Power Move Show (CKLN 88.1FM) Demo Battle, and received their first public appraisal. Shortly after, they were featured on Muchmusic's "Soul in The city" program. Opportunities started knocking on the door and later that year, NFL all-star Andre Rison signed the group to his own label, Bullpen Records . Point Blank moved to Atlanta, where they resided with Andre Rison and the late Left Eye Lopez the group recorded several singles and shared stages with remarkable groups like Outcast. In 1997 Point Blank dropped the 12'' single " Startin Shit/ 3 Man Weave " . Before long they were featured in The Source Magazine , representing music splurging from the city of Toronto. In 2000 Tilt Rock Records dropped Point Blank Underground - a compilation of 16 tracks from previous work, which sold roughly 5000 units. The release was followed by the single " Thin Line . " The track grew to befall one of the most requested Canadian tracks in record pools all across Canada and charted on Flow 93.5's Battle of the Beats for a myriad of weeks. Success surrounded the group as they started getting features on main TV and Radio shows and appearing on publications such as Peace, Pound, Now Magazine as well as Toronto Star and The Sun . In 2003 Ed The Sock from Much Music visited Regent Park, giving the group a chance to speak in behalf of the neighborhood. Shortly after, Point Blank were invited to perform live on Much Music for Ed's big Wham Bam, as well as host Rapcity, where their video " Want It Wit Us ," had reached the top 5 chart on MuchMusic's Rapcity.

6) Point Blank is an alias of techno producer Jeroen Verheij. This alias was used for the track "Meng's Theme" which popularly appeared on the R&S compilation "In Order To Dance 5"

7) Point Blank were a hardcore band that released 2 EPs on Nemesis records in the early 90s.

8) Point Blank were a Alternative/Pop Rock band from Maryland in the late 90's. Originally called Euphoria, Caliber and Nirpex (based on their influences being Nirvana and MxPx) they finally settled on Point Blank and put out their debut album Life As We Know It. After releasing a demo/ep they parted ways to form other projects including Loving The Lie, Gilmore and Gold Mind Squad.

9) Point Blank AUSTRALIA is for those who like going from one extreme to another or sitting nicely in the middle of the road.
Not pinned down to any particular genre. Always creative & interesting, the music spans a wide variety of genres as diverse as the songs themselves.
There's something for everyone - Catchy pop, 60's/70's influences, melodic punk, garage sounds, trash & treasure, avant-garde, ?old skool' metal, jazz fusions,classic rock as well as genres undefined. The ultimate expression of everything indie & alternative.
From the ?tongue in cheek' to the depths of the soul, from the trivial to the profound? the music of Point Blank Australia could be described as instantly familiar yet completely alternative.

American Excess / On A Roll (Vinyl)

American Excess / On A Roll