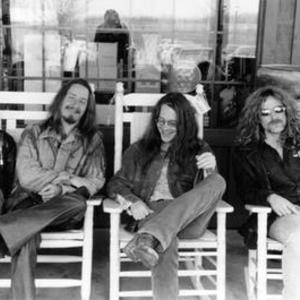 RAGING SLAB THE AMBASSADORS OF BOOGIE-ANGST "....TOO hard for country and western fans, TOO slow for thrash fans, TOO cerebral for hard rock fans and TOO rock and roll for alternative fans; RAGING SLAB has spent its' 10+ years making music that is too something for somebody...." This observation, however, is nothing that would surprise the self-appointed "Ambassadors of Boogie Angst" --- because there is but one commandment etched into the Slabs' stone tablet - and that is " being 'too rock and roll' is like being 'too good looking'.........absolutely impossible!"

"....TOO hard for country and western fans, TOO slow for thrash fans, TOO cerebral for hard rock fans and TOO rock and roll for alternative fans; RAGING SLAB has spent its' 10+ years making music that is too something for somebody...."
This observation, however, is nothing that would surprise the self-appointed "Ambassadors of Boogie Angst" --- because there is but one commandment etched into the Slabs' stone tablet - and that is " being 'too rock and roll' is like being 'too good looking'.........absolutely impossible!"
New Yorks' lower east side would seem to be an unlikely mountaintop for the reciept of such an edict---especially in the noise-laden -No Wave of the early 80's---But this is exactly where the Slab found their burning bush ...right on the corner of tenth and third.
Singer/Guitarist/Songwriter Greg Strzempka and Slide Guitarist; Elyse Steinman were two punk rock refugees who had been shot thru the new wave grease and, by 1983, came out....well.... a bit disillusioned.... Greg recounts " Punk music was so busy breaking rules ...that no one seemed to be aware that it was making a whole set of new ones..." to which Steinman adds..."..and Raging Slab was started to never play by anyones rules...!"

From Wikipedia: The group formed in 1985 when Buffalo native Greg Strzempka and Elyse Steinman, both guitarists, met in New York City. After a period of cohabitation they eventually married. The two had a shared interest in the heavy rock sounds of 1970's style "boogie" rock and such contemporary punk rock groups as the Ramones and Black Flag. The couple enlisted the services of drummer Kory Clarke (Warrior Soul and Space Age Playboys) as well as a third guitarist, Dimitri Brill (DJ Dimitri from Deee-lite), and the nascent boogie group began playing their first shows in Manhattan's lower east side rock clubs.

By 1986 the group had gone through several personnel changes, and both Clarke and Bell had departed, but the line-up solidified somewhat with the addition of Alec Morton on bass guitar. The group began to build a steady and loyal following around the N.Y.C and New Jersey area, playing many shows with the Butthole Surfers and also with Strzempka and Steinman's then next door neighbours, White Zombie. Utimately the band would utilize the talents of over twenty different drummers, including Black Label Society co-founder Phil Ondich, Monster Magnet drummer Bob Pantella, and New Orleans native Rob Cournoyer, before finding Backdraft drummer Niklas Matsson to fill out the line up.

In 1987 the group recorded their first album, Assmaster, released on the New Jersey based punk label Buy Our Records. The cover art was executed by Marvel Comics artists Pat Redding and Pete Ciccone, and Raging Slab began to tour across the United States. In 1988 Steinman and Strzempka decide to add a third guitarist, Mark Middleton, and the group released their second album, True Death.

By 1989 several "major" labels were bidding to sign Raging Slab, and ultimately it was RCA Records that attracted the band to sign a multi-record contract. The group recorded their eponymous third album Raging Slab, produced by Daniel Rey (Iggy Pop, The Ramones, Masters of Reality). To help support this album the group also produced a video, and the clip for their song "Don't Dog Me" featured the band being dragged around the Mojave Desert by a monster truck. The video climbed to #2 on the MTV countdown.

A 1990 New York Post review of Raging Slab described the groups sound as "Lynyrd Skynyrd meets Metallica". By this time the group was touring extensively, opening for big name acts such as the Red Hot Chili Peppers, the Ramones, Molly Hatchet and Warrant. One of the bands that had opened for Raging Slab on their 1990 tour was a then little known group called Mr. Crowe's Garden, who were soon to become the Black Crowes. It was during this time that Strzempka and Steinman purchased a rural property in Pennsylvania and built "Slabby Road", the groups personal recording studio. The members of the group lived together on the farm in a type of "communal" relationship and began recording their second RCA record, From A Southern Space, produced by Alex Perialis (Anthrax, M.O.D., S.O.D.). Executives at RCA were not pleased with the direction that the group was going with this recording and decide to withdraw their support for its release. During this time the group also opened for Guns N' Roses on their "top secret club tour" .

The band reentered the studio to record their third RCA record FreeBurden with producer Michael Beinhorn (Soundgarden, Ozzy, Chili Peppers) and during recording, and the group were utilizing the talents of Chili Pepper and Pearl Jam drummer, Jack Irons. Once again their work is rejected by RCA. Def American impressario, Rick Rubin began to make offers to the group to leave RCA and make records for his flourishing label. The group agreed and Rubin bought out the remainder of their contract with RCA.

In 1993 the band released their Def American debut, the magnum opus double album Dynamite Monster Boogie Concert. A video that the group creates to accompany this release featured former child starGary Coleman, and the video debuted on MTV's popular Beavis and Butt-Head program, where Beavis is heard to declare, "they're like Skynyrd, but cool..."

1994 saw the group embark on a world tour, playing with Lenny Kravitz and Monster Magnet, but while in England the group's then drummer, Paul Sheehans suffered debilitating knee injuries and the group curtailed its touring schedule. They returned to the U.S. and began recording their second Def American (by now known as American Recordings) album. The group delivered Black Belt In Boogie, but the record is rejected by Rubin, who reportedly tells the group that he "didn't hear any songs" on it, and it is not released. It was during this time that third guitarist Mark Middleton chose to leave the band, citing "personal problems" as the reason for his departure. The group returned to the studio to record its next album Sing Monkey, Sing!, which was released with very little publicity. American Recordings then severed its relationship with its distributor Warner Bros. Records, but neglected to tell the members of Raging Slab that it had done so, and also overlooked the legalities of releasing the group from its contract. Sing Monkey, Sing! is then sold to the Colombia Record and Tape Club, and the band began legal proceedings against their former label. Deciding that formal proceedings against such a powerful adversary would result only in their own financial ruin, the group decided to wait out the remainder of their contract, which effectively barred them from releasing any new music until the year 2000.

In 1997, however the group began gigging and recording for their next release, utilizing the talents of drummerPhil Ondich who subsequently left the band in May 1998 to form Zakk Wyldes Black Label Society. The group is able to lure Dale Crover (The Melvins, Nirvana) to help them with drum duties until a permanent replacement could be found. Crover also played some live shows with the Raging Slab, including some opening spots for legendary guitarist Leslie West. Rob Cournoyer, joined after being referred to the band by Allman Brothers and Government Mule guitarist Warren Haynes.

With the pasing of the year 2000, the group's contractual restrictions finally fell away and they began to again record and release music, and they appear on compilation albums such as the Aerosmith tribute album Right In the Nuts, as well as a supplying a cover version of [[Mississippi Queen]] that appears on the In The Groove compilation album.

In 2001 the group returned with a renewed vigor and they released The Dealer on NYC based independent label TeePee Records, and this was the first album of new and original music released by the band in almost six years. The group toured the US and Canada extensively at this time, and were preparing to embark on a European tour. Scheduled to depart New York City bound for London, England on September 11, 2001, the infamous atrocity that occurred on that date postponed the European leg of their tour until later in 2001. On their return to the US the group once again headed into their studio to begin a new record. This album entitled Pronounced: Eat Shit was released in 2002, also on TeePee Records.

After the release and European tour for Pronounced: Eat Shit, the band took a long hiatus, before announcing that longtime bassist Alec Morton was suffering from congestive heart failure. Slab frontman Greg Strzempka joined Swedish southern-metallers Backdraft in 2003, before changing the band name to Odin Grange. But in the year 2004, drummer Niklas Matsson and bassist Mats Rydstr?m joined Raging Slab for a short tour of the US and the recording of a new record, to be announced in 2006.

Sisterslab And The Boogie Coalition Vol. 1

From A Southern Space