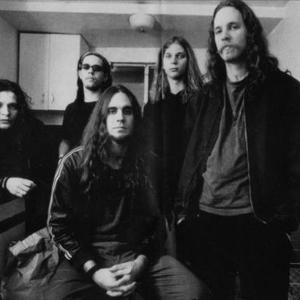 The band formed in the late '80s in New Jersey and featured musicians from some other pretty-well-known bands. Guitarist Louis Svitek had played in Chemical Waste with Jason Coppola and together with original bass-player John Monte in M.O.D. on their third album Gross Misconduct. Original drummer Reed St. Mark did in fact play with the (in)famous proto-black-metal band Celtic Frost on the EPs Emperor's Return and Tragic Serenades as well as the albums To Mega Therion and Into The Pandemonium. Pat Dubar had sung with the straight-edge hardcore band Uniform Choice during the 80's.

The band signed to the Sony/Epic-label and released their self-titled debut-album in 1991. From the beginning they were actually called Mind Fuck, but Sony wouldn't let them release an album under such an offensive name. Hence the name Mind Funk, which seemed appropriate to a certain extent because of the funk-influence on the first album. Funk was not the only influence though, not even that dominating. There were very dark elements in there which were later developed on the 2nd album.

Jason Everman (June '93):
"We're just a rock band. Labels like 'independent' or 'grunge' are just some kind of fashion-statements. But if it helps someone way out in the mid-west to understand what we're about, then it's fine with me."

The first album got a varying amount of acclaim, and was #3 on Kerrang's list of that year's best albums. Well enough to grant their first video for Big House Burning some airplay on MTV's Headbangers' Ball. The fan-base was developing, as the time seemed right for their music. Bands like Extreme, Faith No More and the Red Hot Chili Peppers had already had great success at that time, and one could suppose that with the funk-influence as a common denominator Mind Funk would also get their fair share. Unfortunately the major success did not actually happen, but the band carried on releasing another video, this time for Sister Blue which gained marginal airplay.

The band toured for a while and made an appearance at the 1992 Roskilde Festival in Denmark. By then original guitar-player Jason Coppola and drummer Reed St. Mark had been replaced by Jason Everman (formerly with Nirvana and Soundgarden) and Shawn Johnson respectively, and the band had already started to work on their follow-up. The reason for the split was probably mostly due to musical differencies, the band stated in an interview that they looked for people with a looser style to fit their new musical direction. It was also during this period that the band changed their name once again, however this change was not as big. The changed from Mind Funk to Mindfunk, from two words to one. The reason for this is not known to me.

A big push-back was when Sony dropped them as they were just getting ready to record, most probably due to lack of sales. The band was disappointed but not to the degree that one would expect.

Shawn Johnson (June '93):
"We were never that shaken by the fact that we were dropped. We knew we were good enough to continue anyway, it was probably just a good thing the way things happened. Now we're working with people who believe in us, that was not the case earlier on."

They managed to get a new deal, this time with Megaforce. They channeled their frustrations into the music and gave their new album the appropriate title, Dropped. The mood was a lot darker this time around and the funk-influences present on the predecessor were almost completely gone. The band chose to work with Terry Date as the producer, known for his work with for example Soundgarden, and this seemed to fit the new direction of the music. Slower, darker, heavier but still very Mindfunk-ish. The album was released in May 1993, a video for Goddess was released and the band immediately embarked on a European tour together with Nudeswirl. The video got some airplay, but it seemed like a rather unwise decision to go out on a headlining tour that soon after the release of the album. Not that many people knew about the band at that point and the attendance of the shows left much to be desired.

They did some outdoor festival-dates, for example the big Dynamo-festival in the Netherlands where they faced their largest audience. After that a long time passed, then MTV reported that original bass-player John Monte had quit the band. Rumours said that Jason Everman would handle the bass-duties from now on. (He played bass with Soundgarden on the Louder Than Love-tour) He instead left Mindfunk in September '94 to join the Army 2nd Ranger Battalion and the Special Forces. His sergeant told us "he's currently trekking in Tibet and will be attending the Vancouver film school". The band was then a four-piece with original members Patrick and Louis, together with drummer Shawn who played on Dropped, and temporary bassist Frank Ciampi who had previously played with the bands Generation Waste and High Tension Wire. Spike Xavier, from Mind Over Four and The Humble Gods, also played bass for a period of time.

Spike Xavier (sometime '98 or '99):
"I did one tour as bassist in Mind Funk and Jason and I become pretty good friends. I saw them first in Copenhagen, Denmark, never expecting I would end up playing bass for the band for a tour. When we toured, Jason and I were the only two guys who didn't smoke dope. It's very irritating to be in a locked van if you don't smoke. We just drove the equipment truck and ended up driving that thing through hell and high water."

Mindfunk then recorded and released their third album, People Who Fell From The Sky, without much support from their label. They didn't even have a contract in the US, hence the availability problems of the album. The music is even darker than on Dropped and reminiscent of early Black Sabbath mood-wise, preceding much of the stoner-rock movement that soon became trendy.

And then there was the split-up, and from now on the picture gets even blurrier. There was talk about Pat, Shawn and Spike Xavier jamming after that, but Mindfunk was definitely no more. Pat is reported to have married, and reformed Uniform Choice, if only temporarily. Previous bassist John Monte played with the band Cheap Wine Graffitti, former drummer Reed St. Mark is reported to be a personal trainer at the Palisadium Health Spa in Cliffside Park, NJ, and Louis has been involved with Ministry since that, toured and played on their albums Filth Pig and Dark Side Of The Spoon, as well as with The Revolting Cocks. Pat and Spike are, as far as I know, currently in a band called Corporate Avenger.

People Who Fell From The Sky