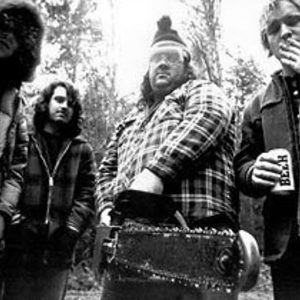 Tad was an American grunge band from Seattle, Washington led by Tad Doyle. Among the first of the many bands which came out of Seattle in the grunge era, Tad was notable for the fact that its music had a noticeable 1970s metal influence, rather than the punk which influenced most other grunge bands. Although their commercial success was limited, their music is still highly regarded amongst grunge fans.

Led by Tad Doyle on vocals and guitar, Tad was formed in early 1988 by Doyle and bassist Kurt Danielson, who met while at a Christian Banquet. They previously played together when Danielson's band Bundle of Hiss played with Doyle's previous band (in which he played drums) H-Hour. Doyle had also earlier played in a Gang of Four cover band called Red Set. They recruited drummer Steve Wied (formerly of Skin Yard and Death and Taxes) and guitarist Gary Thorstensen (ex-Treeclimbers) to complete the original lineup.

Tad was among the first bands to be signed to Sub Pop Records and was possibly the first pioneer of what was to be later called grunge rock. In 1987, Doyle had released the "Daisy/Ritual Device" single on Sub Pop, produced by seminal Seattle producer Jack Endino, for which Doyle wrote and performed all music. Tad's debut album God's Balls appeared in early 1989 and was also produced by Endino. In March 1990 the band released the Salt Lick EP, recorded by Steve Albini. The single "Wood Goblins" was released in the same year, but was apparently banned by MTV. After a European tour with Nirvana, Tad returned to Seattle and recorded their second album 8-Way Santa (1991), named after a type of blotter acid. Produced by famed 90's grunge and alternative producer Butch Vig (better known for Nirvana's Nevermind, Smashing Pumpkins's Siamese Dream and as drummer for the band Garbage, the album was far more pop-oriented than its predecessors, featuring such songs as "Jinx," "Stumblin' Man" and "Jack Pepsi." "Jack Pepsi" was released as a single, but Pepsi filed a lawsuit against the band due to the cover art on the single, which was the Pepsi logo with "Tad" in place of "PEPSI." Another lawsuit was filed due to the cover of 8-Way Santa (which was a found picture of a man fondling a woman's breast). The couple in the photograph, one of whom had since become a born-again Christian and remarried, took exception and sued. Sub Pop changed the album cover to a group shot.

After a very brief acting stint in Singles, Tad was offered its first major-label opportunity by Giant Records. However, Steve Wied had left, joining Willard, and later Foil. Rey Washam (formerly of Scratch Acid) briefly filled on drums in 1991 but was later replaced by Josh Sinder, previously of the Accused. Sinder debuted with Tad on their last Sub-Pop release, the "Salem/Leper" single (which featured "Mud-Man," Josh's apparently mumps-afflicted brother, on the cover). Their major label debut Inhaler, appeared later in the year to positive reviews. The record failed to break the band however, even though they were chosen to open for Soundgarden on their 1994 Superunknown tour. Giant Records quickly got cold feet and dropped the band when a poster promoting Inhaler surfaced featuring Bill Clinton smoking a joint with the caption reading "It's heavy shit".

In 1994, the band released Live Alien Broadcasts on Futurist Records, which was a best-of live studio recording. Thorstensen left but they secured a second major-label deal with EastWest/Elektra Records in 1995 releasing their fifth album Infrared Riding Hood. Tad were dropped again in 1996 when the album received disappointing sales. They continued to gig for the remainder of the year before Sinder left to form the Hot Rod Lunatics. He was replaced on drums by Mike Mongrain of Foil. Tad's final single "Oppenheimer's Pretty Nightmare/Accident on the Way to Church" appeared in 1998 on Up Records. A year later the band dissolved.

Following Tad's breakup, Doyle formed Hog Molly in 2001 with Willard bassist Ty Garcia, and 50 paces guitarist Martin Chandler, releasing the album Kung-Fu Cocktail Grip late the same year. He later formed the band Hoof. Tad's current (2008) band Brothers of the Sonic Cloth has been playing in Seattle night clubs. Kurt Danielson went on to join Valis, a project which included members of Screaming Trees and Mudhoney. Then he formed The Quaranteens, a post-punk/new-wave band with Craig Paul, before moving to France. He is back in Seattle since 2008, and has started to write a novel. Josh Sinder has gone on to play drums in The Insurgence and also plays with Marky Felchtone from Zeke in new band Hellbound For Glory.