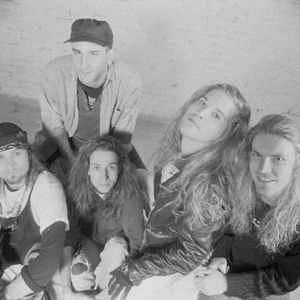 Mother Love Bone was a rock band which formed in Seattle, Washington, United States in 1988. The band consisted of Andrew Wood (vocals, keyboards), Bruce Fairweather (guitar), Stone Gossard (guitar), Jeff Ament (bass) and Greg Gilmore (drums). The band released only one full length album, "Apple" (1990). The band disbanded in 1990 after Wood died in a coma caused by a heroin overdose. Ament and Gossard later formed Temple of the Dog and Pearl Jam.

In early 1989, the band signed to PolyGram subsidiary Mercury Records. As part of its contract PolyGram also created the Stardog Records imprint exclusively for the band. In March 1989, the group issued its debut EP, Shine, becoming the first of the new crop of Seattle bands to have a release on a major label. The record sold well and rapidly increased the hype surrounding the band. John Book of Allmusic said the "record contributed to the buzz about the Seattle music scene."

In late 1989, the group returned to the studio (this time in San Francisco, California) to record its debut album, Apple. Despite some initial difficulties, the record was on-time for its projected March 1990 release. By this point interest in the band had hit a fever pitch and it seemed destined that the band were going to make it big. Only days before Apple was slated to be released, however, frontman Andrew Wood, who had a long history with drug problems, overdosed on heroin. After spending a few days in the hospital in a coma, Wood died, effectively bringing the group to an end. The album would see release later that year on July 19, 1990. Kim Neely of Rolling Stone said that the album "succeeds where countless other hard rock albums have failed, capturing the essence of what made Zep immortal ? dynamics, kids! ? and giving it a unique Nineties spin."

On Earth As It Is: The Complete Works CD3

On Earth As It Is: The Complete Works CD2

On Earth As It Is: The Complete Works CD1