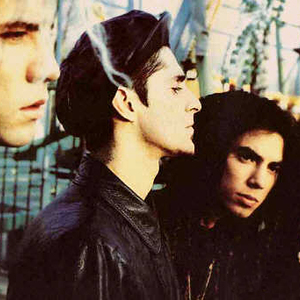 Jane's Addiction is an American alternative rock/alternative metal band from Los Angeles, California formed in 1986. They dissolved in 1991, but briefly returned to tour in 1997 and subsequently vanished shortly thereafter. They officially returned in 2001, before breaking up yet again in 2004. In April 2008 the original lineup reunited for the first time for a performance at the NME Godlike Genius Award show. As of October 2008 the original lineup was performing again.

The band was influenced by punk, goth rock, metal, funk, hard rock, and psychedelic styles; lead singer Perry Farrell once described the band as a cross between Duke Ellington and Bad Brains. The band's name refers to Jane Bainter, a now ex-heroin addict, who was a housemate of the band.

Formed out of the ashes of front-man Perry Farrell's previous band, Psi-Com, Jane's Addiction is often compared to iconic '70s rockers Led Zeppelin. In the summer of 1985, Farrell was searching for a new bass player for the faltering Psi-com when he was introduced to Eric Avery. Although Farrell and Avery worked well together, Psi-com disbanded before they managed to play live with their new bassist. Later, Eric's sister introduced the duo to Stephen Perkins. Following this fortuitous introduction, Perkins suggested that his friend, and Dizastre bandmate, Dave Navarro might be a suitable guitar player for the new band, dubbed "Jane's Addiction" in honor of Farrell's housemate, Jane Bainter. With this lineup, the band released three albums: Jane's Addiction, Nothing's Shocking, and Ritual de lo Habitual.

Though the band had only released two studio albums and one live (Jane's Addiction), their effect on the rock and alternative music scenes was enormous. They became the poster children for a new wave of artful and thoughtful rockers who were eschewing the confinements of commercial rock music and stretching to express themselves both musically and theatrically. In their hey-day, Farrell created Lollapalooza, the alternative rock festival that revolutionized the North American concert promotion world by bringing together an ecclectic mix of musicians, exhibitors, and attractions for a high energy weekend of music and alternative lifestyles.

The "Ripple" single that the band produced for the Grateful Dead tribute album Deadicated was the final studio track for this incarnation of the band. Internal strife and rampant drug usage lead the band to break up in 1991 after playing two nights at Hawaii's Aloha Tower; with Perkins and Farrell performing the final show completely naked, without incident.

The band members pursued other projects in the 1990s. Farrell and Perkins formed another band Porno For Pyros which had some success. Dave Navarro joined Red Hot Chili Peppers, standing in for John Frusciante who had left the band to pursue his own solo projects. Navarro lasted one album for Red Hot Chili Peppers - 1995's One Hot Minute, but a combination of poor sales (only 5 million, less than half that of their preceding Blood Sugar Sex Magik), and 'creative differences' (possibly fuelled by Navarro jokingly commenting that the Chili Peppers were "his band now") resulted in Navarro being fired from the band shortly afterward.

The band spent 2003 on an extensive worldwide touring in support of Strays, including, in a homecoming of sorts, a summer headliner slot in a reincarnated Lollapalooza US tour. Following the 2003 tour, Jane's Addiction broke up again, according to guitarist Dave Navarro's site in June 2004. Although details surrounding the band's demise are sparse, Navarro claimed that the reasons for the breakup were essentially the same as they were in 1991.

Navarro, Perkins, and Chaney have since formed a new band, The Panic Channel, with singer Steve Isaacs. They released their debut album (ONe) on August 15th 2006. Perry Farrell has also moved onto a new project entitled The Satellite Party and unveiled material at Lollapalooza 2005.

Jane's Addiction's last #1 single was "Just Because," but their most commercially popular song - "Been Caught Stealing" still receives airplay. Arguably the fan favorite would be "Jane Says," despite the fact that it was never officially released as a single.

A Best of Jane's Addiction compilation album was released on September 19, 2006. Also in 2006, the song "Stop!" was used as part of the soundtrack to the hit console game 'Guitar Hero II'.

Jane's Addiction performed at the first-ever NME Awards USA on April 23, 2008, with the reunited core line-up of Perry Farrell, Dave Navarro, Eric Avery, and Stephen Perkins. This was the first performance with bassist Eric Avery since 1991, taking place after their acceptance speech for the "Godlike Genius Award". To follow this up, the original line up performed their first full set in 17 years in Los Angeles on October 23, 2008 at La Cita Bar, and played two further club gigs at the El Cid in Los Angeles on November 20. and the Echoplex on February 16, 2009.

Around this time, photos of Eric Avery, Stephen Perkins, and Dave Navarro, taken by Trent Reznor, appeared on Nine Inch Nails' official web site, leading to speculation that Reznor could be helping Jane's Addiction record new material. Reznor subsequently posted a blog entry announcing that Jane's Addiction would accompany Nine Inch Nails on their summer 2009 tour, which kicked off on May 8 in West Palm Beach, Florida.

To accompany the tour, newly recorded versions of "Chip Away" and "Whores" have been released for free via the official tour website. Regarding the tracks, Perry Farrell states that: "just to get some creative juice flowing, we went into the studio for about two weeks. We had the idea to re-record two tunes, just because they'd never been done officially in the studio. And we had some fun writing some new things. A handful that are close to finished, but not quite done. But there's no rush to put anything out at this point." Discussing the tracks on his blog, guitarist Dave Navarro stated, "The thinking being that we wanted to give our longtime listeners something to celebrate the tour and "Whores" has always been one of the tracks that defined Jane's early on."

A box-set, entitled A Cabinet of Curiosities, was also released to accompany the NIN/JA tour in April 2009.

As of March 31, 2010, the long-rumored news became true: Duff McKagan is officially the fourth member and bassist of Jane's Addiction, who are currently in the studio working on a new album. The news was reported by Dave Navarro on his Twitter page.

A Cabinet Of Curiosities CD3

A Cabinet Of Curiosities CD2

A Cabinet Of Curiosities CD1

Up From The Catacombs: The Best Of Jane's Addiction