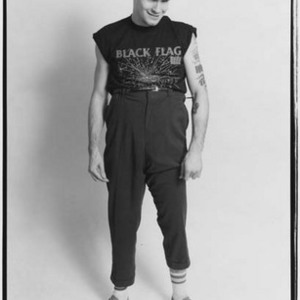 Henry Rollins (born February 13, 1961 as Henry Lawrence Garfield) is an American Grammy Award-winning alternative rock singer and songwriter, spoken word artist, book author (prose and poetry), radio and TV personality, occasional movie actor, comedian, and voice-over artist. He is perhaps best known for his work with the hardcore punk band Black Flag from 1981 to 1986, and for leading the Rollins Band since 1987.

He is perhaps best known for his work with the hardcore punk band Black Flag from 1981 to 1986, and for leading the Rollins Band since 1987.

Critic Steve Huey decribes Rollins as "a post-punk renaissance man ... Rollins is relentlessly busy ... and has kept his artistic integrity, becoming a kind of father figure for many alternative bands of the '90s."

Rollins grew up in Washington, D.C.. His parents divorced when he was young, and Rollins was raised primarily by his mother, Iris, who taught him to read before he entered school, and who he credits with instilling his lifelong love of reading.

He was prescribed Ritalin as a child and was sent to the The Bullis School, a Washington, D.C. military school. He disliked the authoritarian atmosphere and the then-boys-only campus, which impeded his early attempts at dating and made him uncomfortable around women for several years. More positively, he said Bullis helped instill in him a sense of discipline and a strong work ethic. It was at military school that he began to develop his muscular build, and began writing. Rollins described his early literary efforts as follows:

"I would write short stories, and they're probably horribly written, about blowing up my school and murdering all the teachers. Which I would show to this English teacher who I was friends with, my one ally at this school. And he would go, "Okay, don't show this to your real English teacher. You know, because you can't say 'fuck' and hand it in as an essay at this school." I went to a pretty uptight all boys school. But he said, "Show me this stuff." And, "I like that you're writing creatively. Keep this up. Just don't show it to your 'teacher-teacher' because you'll get in trouble.""

After high school, Rollins worked at a number of jobs (including as a laborer at the National Institutes of Health), before becoming the manager of a H?agen-Dazs ice cream store.

A longtime music fan with wide-ranging tastes (a fan of Washington D.C.'s funky Go Go music from his teen years) Rollins became involved in the punk music scene through his close friend Ian MacKaye (who would later head Minor Threat and Fugazi). Bad Brains was one of Rollins's favorite groups; singer H.R. would sometimes coax Rollins onstage to sing with them.

Rollins joined S.O.A. (State of Alert)as a singer; the group released one EP on Dischord Records before disbanding. Rollins's steady employment enabled him to finance the recording and pressing of the S.O.A. EP.

In 1981, his friend Mitch Parker gave him a copy of Black Flag's Nervous Breakdown EP. Rollins soon became a huge fan and began exchanging letters with the group. When Black Flag toured the East coast, playing Washington D.C. and New York City, Rollins attended as many performances as he could. At an impromptu show in a bar, he asked to sing Clocked In. As vocalist Dez Cadena was switching to guitar, the band invited Rollins to a rehearsal. Impressed by his stage demeanor, they asked him to become their permanent vocalist. Despite some doubts, he accepted, due in part to MacKaye's encouragement. His high level of energy and intense personality made him a perfect fit as their frontman.

After joining Black Flag, Garfield changed his surname, and got the Black Flag logo tattooed on his arm (thought it was the back of his ultra-thick neck?). It was to be the first of many tatoos (others are punk rock group The Misfits' ghost-faced mascot, the "stickman" sigil of German experimentalists Einsturzende Neubauten, and an impressive 'Search and Destroy' logo taking up his entire back.) As Rollins become more heavily tattooed and more havily-built, wore less clothing on stage, and would often take to the stage barechested and barefoot wearing only a pair of black shorts.

Rollins toured and recorded with Black Flag from 1981 until their breakup in 1986. During Rollins' tenure, Black Flag's music underwent dramatic changes. Though guitarist Greg Ginn was the primary songwriter, Rollins wrote a number of songs with Black Flag.

Throughout most of his time with Black Flag, Rollins kept a diary of his thoughts and experiences. In 1994 he published these diaries as Get In The Van; the book also featured many photographs, as well as Rollins' reminiscences of his time with the group before he kept a diary. Rollins read portions of Get In The Van for an audio book; this recording won a Grammy. Rollins later characterized the entire affair as "corny" and gave his Grammy statuette to an acquaintance.

Rollins began publishing his own books during his time with Black Flag. His early efforts were self-made volumes (photocopied and stapled), though he quickly began printing chapbooks before moving on to establish 2.13.61, an independent publisher named after his birthday.

Also while in Black Flag, Rollins met Joe Cole, an acquaintance of Ginn. They became close friends, and, in December 1991, Rollins and Cole were robbed at the home they shared. Cole was murdered by a gunshot to the head, and while Rollins escaped without injury, the crime remains unsolved. Most of Rollins' subsequent efforts have been dedicated to his late friend's memory. Rollins recounted his friendship with Joe, Joe's murder, and Rollins' attempts to 'come to terms' with this, in his book Now Watch Him Die.

After Black Flag broke up in early 1986, Rollins quickly formed a new group and released a solo album and an EP with guitarist Chris Haskett. Soon, he added former Gone members Andrew Weiss and Sim Cain, calling the new group the Rollins Band. They gained popularity through the strength of albums like The End of Silence (1992) and Weight (1994). He also gained roles in movies and television shows (particularly as a VJ on MTV) and recorded a cover of AC-DC's Let There Be Rock in 1991 with The Hard-Ons.

Beginning in his later years in Black Flag, he has toured as a spoken-word artist, focusing mostly on social topics, as well as recounting his life experiences. His blend of self-deprecating humor and serious discussion of important social issues has gained him great popularity. He has released nine spoken-word albums through his 2.13.61 publishing company (and several through other record companies); 2.13.61 has also released books by Rollins, Joe Cole, Nick Zedd, Nick Cave and Michael Gira, as well as albums by Rollins Band, Exene Cervenka, Hubert Selby Jr., The Birthday Party, and Gun Club.

Rollins is an avowed free jazz fan, having released albums by Matthew Shipp and Roscoe Mitchell on his 2.13.61 label. In 1990, Rollins guest-hosted a Los Angeles, California college radio program and devoted much of this appearance to saxophone player Albert Ayler's music.

On May 17, 2004, Rollins began hosting a weekly radio show, Harmony In My Head (named after a favorite Buzzcocks song) on Los Angeles' Indie 103.1 radio. The show aired every Monday evening, with Rollins playing a variety of rock, punk, rap and jazz music. He put the show on what would be an indefinite hiatus, with the last show airing on December 27, 2004, in order to undergo a spoken-word tour in early 2005. An expanded edition of Rollins' song lists and show notes of the first run of the show were published by 2.13.61 in November 2005 by fan demand as the book Fanatic. In late 2005, Rollins announced the return to the airwaves of Harmony in My Head; Internet users can listen online every Tuesday evening from 8 to 10 p.m., PST, at www.indie1031.fm as of December 27, 2005.

Rollins is a co-host of the television program Full Metal Challenge on TLC, as well as the host of a weekly series called The Henry Rollins Show on the Independent Film Channel (IFC) airing every Saturday night at 10 p.m. The show is described this way on its official Web site henryrollins.ifc.com.

"Henry Rollins unveils the independent alternative to late night programming with his unique take on music, film, politics and pop culture with the help from intelligent celebrity guests and the most eclectic musical performances on television."

Prior to his weekly series on IFC, Rollins was a host of Henry's Film Corner, a monthly look at movies and cinema.

In 2004, he became an outspoken human rights activist, most vocally a crusader for gay rights. He has pinpointed the rights for gays to marry as a "vital issue impeding on the rights of Americans today." He was the host of a benefit concert called "WedRock" to raise money for a pro-gay-marriage organization. During the 2003 Iraq War, he started touring with the United Service Organizations (USO) to entertain troops overseas, despite his personal opposition to the war and the Bush administration[2]. Rollins has also been very active in the campaign to free the "West Memphis Three" - three young men who many believe were wrongly convicted of murder. Rollins appears with Public Enemy frontman Chuck D on Black Flag song Rise Above on "Rise Above: 24 Black Flag Songs to Benefit the West Memphis Three," a benefit album to help pay for the West Memphis Three defense fund. He also appears on a cover of Black Flag's Slip It In with singer Inger Lorre.

A Rollins In The Wry

Nights Behind The Tree Line