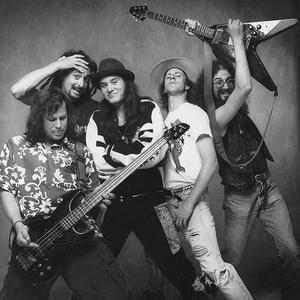 Faith No More is an alternative metal group that formed in San Francisco, California, USA in 1981. Their music combines elements of various different genres, including heavy metal, funk, hardcore punk, progressive, electronica, soul, gospel, film scores, soft rock, R&B, hip hop and jazz, among many others. Faith No More formed in 1981 out of the ashes of Faith No Man, a band formed and headed by Mike "The Man" Morris.

Faith No More formed in 1981 out of the ashes of Faith No Man, a band formed and headed by Mike "The Man" Morris. Roddy Bottum, Mike Bordin, and Billy Gould, all ex-Faith No Man members, decided they wanted rid of him, and rather than firing him, all three quit. They changed their name to Faith No More at the suggestion of a friend (as "The Man" was no more). After cycling through a few guitarists, the members recruited Jim Martin. A number of singers passed through, including a brief stint by Courtney Love. Chuck Mosley became the full time singer and appeared on their first two records. Their best known song from this era is probably "We Care a Lot", which satirized the prevalence of charity-related rock efforts such as Live Aid and "We Are the World".

The band gained a reputation for infighting and friction that sometimes went way beyond the limits of "creative differences." In a notorious interview in 1987, Mosley claimed that Martin had hit him with a bottle, and there were frequent rumours of physical confrontations between band members. Indeed, in a short history of the band in one issue, the British music newspaper Melody Maker observed that the band's internal relationships had descended into "pathological hatred". Bordin in particular seemed to be very much the "whipping boy" of the band and the butt of numerous cruel pranks and practical jokes. It is doubtful that the band would have stayed together had they not been successful after their second album, Introduce Yourself.

Mosley was fired in 1988, and replaced with singer Mike Patton. Patton would prove a more versatile singer than the monotone Mosley. At the time, he was singing with his high school band Mr. Bungle (and would continue to do so during his Faith No More years), and dropped out of Humboldt State University to join Faith No More. The group's first record with Patton, The Real Thing, was a major hit, selling over a million copies and earning the group a grammy.

Patton's astonishing vocal range was, arguably, the salvation of Faith No More. Although never formally trained, the young ex-student was able to veer wildly from a deep, operatic bass through to screeching banshee death metal yowls and all the way up to soulful, almost feminine drawling?usually over the space of one album (as opposed to doing it in a single song as in the band Mr. Bungle). For example, the exuberant rap on "Epic" and the sleazy jazz vocals of "Edge Of the World" (on the 1989 album The Real Thing) are wildly different. This burgeoning singing ability enabled the band to expand and develop far further. Keyboardist Bottum memorably described his new colleague as "a pair of lungs on legs."

The Real Thing (or TRT for short) has been described as "not quite early Brian Eno joins Led Zeppelin and Funkadelic." The video for "Epic", which featured slow motion footage of a fish flopping out of water, received extensive airplay on MTV in the summer of 1990, despite provoking anger from animal rights activists. That same year, Faith No More gave memorable performances at the 1990 MTV Video Music Awards (September 6) and on Saturday Night Live (December 1).

Faith No More displayed a distinctly experimental bent on their next album, Angel Dust. One critic writes that the album is "one of the more complex and simply confounding records ever released by a major label," and another writes that "'A Small Victory', which seems to run Madame Butterfly through Metallica and Nile Rodgers ? reveals a developing facility for combining unlikely elements into startlingly original concoctions." Angel Dust featured the singles "Midlife Crisis" and "A Small Victory", as well as a re-recording of the theme to the film Midnight Cowboy. Later pressings of the album also included their cover of the Commodores classic "Easy", which in some parts of the world became the band's biggest hit. Angel Dust, though not as successful as TRT in the U.S., sold 700,000 copies there, and did manage to outsell TRT in many other world charts. In Germany, for example, the record was certified Gold for sales of more than 270,000 copies. Along with heavy airplay of "Easy" and "Midlife Crisis", the album became a bit of a sleeper hit in the U.K., South America, Europe and Australia.

After touring to support Angel Dust in the summer of 1992, (including tours with Metallica and Guns N' Roses), longtime guitarist Jim Martin was fired (although he claims he quit) during the early stages of recording their follow-up, King for a Day... Fool for a Lifetime in 1995. He was replaced by Mr. Bungle guitarist Trey Spruance. However, when the subsequent world tour was about to begin, Spruance jumped ship, leaving the band to recruit their keyboard roadie Dean Menta to handle guitar duties. KFAD/FFAL remains the band's most heavily criticised album, varying in styles and moods from heavy and slow to spasmodic and jazzy. KFAD/FFAL did however sell acceptably in the U.K., Germany and Australia. In the U.S. the album failed to get any sort of attraction or following, slipping out of the charts quickly. Sales (about 1.5 million) were below that of Angel Dust. The band accordingly decided to cut their world tour short by 4 months, deleted the singles "Gentle Art Of Making Enemies" and "Take This Bottle", and released a 7 x 7-inch box set of singles that included the B-sides and some interviews between the songs. An automobile accident occurred while in Bearsville, New York for the recording of "King For A Day." It's been described as rather bad. Mike Patton, Mike Bordin and Trey Spruance were in it, Patton was driving. They lived...Patton doesn't drive any more. Patton comments, "Well we saw God. We had a really bad car accident. ...We had to look at lot of things in the face...it was nice."


Album of the Year was released in 1997 and featured yet another new guitarist, Jon Hudson, who was a former roommate of Billy Gould. The album debuted much higher than expected in some countries, for example Germany (#2, later going gold) and Australia (#1, going platinum). In an additional 12 countries in Europe, it went either gold or platinum. In the U.S. the reaction was slow for the album; however, just as interest was picking up on their tours and album they called it a day. Singles "Ashes To Ashes" and "Last Cup Of Sorrow" had minimal success. Electro-tinged ballad "Stripsearch" was released as a single in various countries (excluding the U.S. and U.K.). "She Loves Me Not" was cancelled as a single which was a little indicator of their imminent break-up.

On April 19th 1998, after 16 years as a band, Faith No More dissolved. Although the break-up went by with limited media attention, many rumors had surfaced as to the reason, some which included infighting, disagreement over the amount of side-projects (since the line-up had consistently changed), collective exhaustion of creative energy and even the band's growing popularity, which had been attributed as a main influence for many nu-metal bands who would ascend to the mainstream at the end of the decade. Despite being extinct for some years, the band still manages to influence and inspire musicians worldwide.

Patton went on to collaborate with John Zorn, and has been active with several other groups, including Tomahawk and Fant?mas. Guitarist Jim Martin went on to collaborate with Anand Bhatt. Keyboardist Roddy Bottum formed Imperial Teen, whose sunny pop music seemed very different from Faith No More. Mike Bordin regularly performs as a member of Ozzy Osbourne's band, as well as Black Sabbath and he was also a member of Korn for a tour when their drummer David Silvera had a problem with his wrist. Billy Gould is a member of Brujeria, as well as founder of Kool Arrow Records, and has also overseen the releases of various Faith No More compilations. Jim Martin also now has the 235th largest pumpkin ever measured, and has made guest appearances on various records, including Antipop by Primus, as well as having released a solo album titled Milk and Blood (1996).

Faith No More also gained more publicity when their tracks "Falling To Pieces" and "The Perfect Crime" were featured in the films Black Hawk Down and Bill & Ted's Bogus Journey respectively.

On the 25th of February 2009 Faith no More announced a reunion tour, to take place in 2009. The band are set to play a series of European festivals, according to a press release from frontman Mike Patton. The official press release for their reunion, written by Bill Gould, was released a day later and can be read on FNM.com.

King For A Day... Fool For A Lifetime (Remastered) (Deluxe Edition)