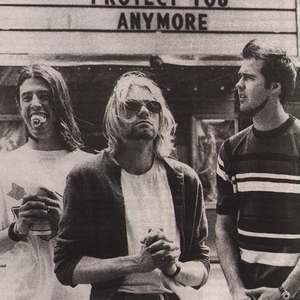 There are multiple artists tracked as "Nirvana" on Last.fm. Following are six, listed in order of prominence: 1) Nirvana was a popular and highly influential American grunge band. The band formed in Aberdeen, Washington in 1987, and was part of the Seattle grunge scene of the late 80s. Other Seattle grunge bands such as Pearl Jam, Alice in Chains and Soundgarden also gained in popularity, and, as a result, alternative rock became a dominant genre on American and Canadian radio and music television during the early-to-mid '90s.

1) Nirvana was a popular and highly influential American grunge band. The band formed in Aberdeen, Washington in 1987, and was part of the Seattle grunge scene of the late 80s. Other Seattle grunge bands such as Pearl Jam, Alice in Chains and Soundgarden also gained in popularity, and, as a result, alternative rock became a dominant genre on American and Canadian radio and music television during the early-to-mid '90s.

Nirvana's initial incarnation consisted of Kurt Cobain on guitar and vocals, bassist Krist Novoselic, and drummer Chad Channing. After a brief stint as a four-piece in 1989 with the addition of second guitarist Jason Everman, followed soon after by the replacement of Channing on drums in 1990, the band found the lineup that would form the core of the group when they added former Scream drummer Dave Grohl.

As Nirvana's frontman, Cobain found himself referred to in the media as the "spokesman of a generation", with Nirvana the "flagship band" of "Generation X". Cobain was uncomfortable with the attention, and placed his focus on the band's music, challenging the band's audience with their much more abrasive third studio album In Utero, considered to be a conscious attempt to shed their audience. While Nirvana's mainstream popularity waned in the months following its release, their core audience cherished the band's dark interior, particularly after their 1993 performance on MTV Unplugged with the Meat Puppets, a band that Cobain had always idolised, performing with them the songs Oh, Me, Plateau and Lake Of Fire. It was later released and topped the charts in 1994.

Nirvana's brief run ended with the suicide of Cobain in 1994, but the band's popularity expanded in the years that followed. Eight years after Cobain's death, "You Know You're Right", an unfinished demo that the band recorded two months prior to Cobain's death, topped radio playlists around the world. Since their debut, the band has sold more than fifty million albums worldwide, including more than ten million copies of Nevermind in the US alone. Nirvana remains a consistent presence on radio stations worldwide.

In 2004, the box set "With the Lights Out", a collection of radio sessions, home demos, studio demos and outtakes, was released. A year later, "Sliver: The Best of the Box" was released, a compilation of selected "WTLO" tracks, but with 3 new tracks including a track from the famous "Fecal Matter" demo.

2) Nirvana is a UK-based progressive rock band formed in 1967, primarily active in the late 1960s and early 1970s - and still sporadically active to the present day.

The band was formed in the summer of 1967 in an era when melodic pop/rock music with baroque and chamber arrangements and instrumentation was highly-prized. The band, consisted of two songwriter/performers - Greek-born Alex Spyropoulos and Irish-born Patrick Campbell-Lyons who met in London. They produced a number of singles (notably "Rainbow Chaser", "Pentecost Hotel", and "Tiny Goddess") for the fledgling Island Records label.

The band was signed by Island Records' founder Chris Blackwell in the era when he also signed the bands Traffic and Free.

In October 1967 the band released its first album - a concept album produced by Blackwell titled The Story Of Simon Simopath. The album was probably the first narrative concept album ever released - predating story-driven concept albums such as The Pretty Things' S.F. Sorrow (December 1968), The Who's Tommy (April 1969) and The Kinks' Arthur (September 1969).

The next year 1968 their follow-up album, All Of Us, featured a similar broad range of musical styles. Their third album To Markos III was released on the Pye label in 1969.

In 1971 the duo amicably separated for a while, with Campbell-Lyons the primary contributor to the next two Nirvana albums, Local Anaesthetic 1971, and Songs of Love and Praise 1972. Campbell-Lyons subsequently worked as a solo artist and issued further albums: Me And My Friend 1973, Electric Plough 1981, and The Hero I Might Have Been 1983 though these did not enjoy commercial success.

The band reunited in 1985, successfully touring Europe and releasing a compilation album Black Flower 1987 containing some new material. (Black Flower had been the provisional title of their third album.) In the 1990s two further albums were released. Secret Theatre 1994 compiled rare tracks and demos, while Orange and Blue 1996 contained previously unreleased material including a tongue-in-cheek cover of the song "Lithium" originally recorded by the American grunge band Nirvana who released its first album in 1989, and who the band had successfully sued over use of the name Nirvana. The undisclosed terms of the settlement has apparently allowed the original Nirvana to continue using its name and issuing new recordings.

In 1999 the band released a three-disc CD anthology titled "Chemistry" including several previously-unreleased tracks and some new material.

The group was in the school of baroque-flavored, melodic pop-rock music typified by The Beatles of "Rubber Soul" and "Revolver", The Beach Boys of Pet Sounds and God Only Knows, the Zombies of Odessey and Oracle and Time Of The Season, the Procol Harum of A Whiter Shade of Pale, the Moody Blues of Days of Future Passed and Nights In White Satin and The Kinks of Waterloo Sunset. The majority of the tracks on Nirvana's albums fall into that broad genre of contemporary popular music - not easily categorized - but perhaps best described as the baroque or chamber strand of "progressive rock, soft rock or "orchestral pop".

Their first three albums were reissued on CD by Universal in 2003 and received critical acclaim. In 2005 Universal (Japan) reissued Local Anaesthetic and Songs Of Love And Praise.

As of late 2005 the founding members Alex Spyropoulos and Patrick Campbell-Lyons are still sporadically writing and recording.

3) Nirvana was a short-lived Finnish punk band formed in 1980, whose sole release was a 7" vinyl with tracks "Kielletyt leikit" and "Kuljen kaupungilla" with 200 pressings.

4) Nirvana was a Dutch pop group, formed in 1985 by producers Bernard Oattes and Rob van Schaik. The group consisted of Anthony Moendir, Frits Broekrits and Annie Alberti and have released one single, "Say When", which became a big hit. The group split up in 1987.

5) Nirvana is a side project of The Skaters' James Ferraro. Primitive droning drum beats and swirling synthesizers.

Nirvana Live At The Paramount