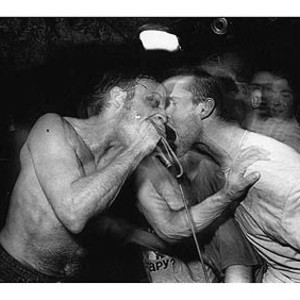 The Jesus Lizard is an American band considered part of the noise rock, post-hardcore, and alternative rock/metal genres. Formed in 1987 in Austin, Texas, and based in Chicago, Illinois from 1989 to 1999, the band took their name from a common nickname for the basilisk, a type of lizard that can run on water. The members of the band were/are: Duane Denison (guitars), David Yow (vocals), David Wm. Sims (bass) and Mac McNeilly (drums).

The Jesus Lizard reformed in 2008, playing a number of shows the next year with their classic line-up. These shows included appearances at the Pitchfork Music Festival in Chicago, and All Tomorrow's Parties music festivals in England and New York.

On October 6, 2009, all of the band's Touch and Go studio albums were re-released with improved sound and bonus tracks. All the albums were remastered by Albini and Bob Weston and have new liner notes and gatefold artwork

While never finding much mainstream success, The Jesus Lizard have been called "a leading noise rock band in the American independent underground ... (who) turned out a series of independent records filled with scathing, disembowelling, guitar-driven pseudo-industrial noise, all of which received positive reviews in underground music publications and heavy college-radio play."

Their music was a scathing mix of piercing guitar, machine-like drums, propulsive bass guitar, and psychotic vocals, often said to be reminiscent of The Birthday Party, which was an accusation also often made of Scratch Acid. Denison's stinging guitar often served more as texture or coloring than as a melody instrument, while the rhythm section's stops and starts were simultaneously precise and brutal. David Yow's frenzied, often incoherent vocals were quite unique, unlike anything past or present. David Sprague suggests that "Yow's disjointed couplets" are reminiscent of a "preacher speaking in tongues."

Through 1994, The Jesus Lizard's studio recordings were recorded and engineered by Steve Albini; he was an avid fan, and his distinctive recording techniques have arguably never been better employed than with The Jesus Lizard. Albini typically keeps vocals "low in the mix," or much less prominent than is typical of rock and roll recordings. In the book 'Our Band Could Be Your Life: Scenes from the American Underground 1981-1991', Michael Azerrad writes that "on the Jesus Lizard albums Albini recorded, singer David Yow sounds like a kidnap victim trying to howl through the duct tape over his mouth; the effect is horrific." (Azerrad, 344).

In 1995, The Jesus Lizard signed a contract with Capitol Records, an action which caused a falling out with Albini, famous for his dislike of major record companies. After two records with Capitol, a song on the Clerks soundtrack, and appearances at Lollapalooza, the band split in 1999. In 2000, Touch & Go issued a CD of 7" tracks and rarities called Bang.

After the split some of the members moved on to other bands. Yow sings in Qui. Denison plays with Tomahawk, and with Kimball in the Denison Kimball Trio (which is actually a duo.)