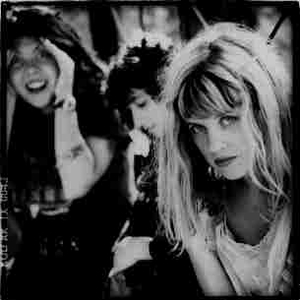 Babes in Toyland was an American alternative rock band formed in Minneapolis, Minnesota, in 1987, when Lori Barbero met Kat Bjelland at a friend's barbeque. Originally four-piece, the band developed into the honed-down trio of Lori (long-time Minneapolis scenester) on drums, Kat (a transplant from Oregon via San Francisco, who moved to Minneapolis specifically to form a band) on vocals and guitar, and Michelle Leon on bass.

Courtney Love, a close friend and former bandmate of Bjelland's in the short-lived group The Pagan Babies, had a brief stint in the band as a bass player in 1987, before being kicked out and later forming Hole two years afterward.

Their debut album Spanking Machine -- released in 1990 -- caught the attention of Sonic Youth's Thurston Moore, who began singing their praises in the music press and invited the band to support them on their European tour. Meanwhile, Spanking Machine was released in the UK by Southern Studios, and was quickly gaining favour with the music press and John Peel who recorded a session with them and named the album as his favorite of 1990.

In the summer of 1991, To Mother was recorded at Southern Studios with John Loder in the producer's seat. The EP entered the independent charts in the top 10 and stayed there for an amazing 13 weeks (ten of which the EP held at the No. 1 position). Early in 1992, Michelle Leon amicably left the band and was replaced by Maureen Herman, an old friend and long-time fan of the band. Their second and most successful album, Fontanelle was released in August 1992 and was followed by the outtakes EP Painkillers in June 1993.

After a number of other tours, Babes in Toyland released Nemesisters, their third and final studio album, in 1995. After this, the band were on-off with Leon's departure leading to the dissolution of their record label contract. In 2001, the band reformed for one final time and performed their final show on November 25 in Minneapolis. After this, the band officially disbanded, however, Kat Bjelland performed a number of shows in Europe under the band's name, only to face legal action from former members if the tour went further ahead.

Minneapolism (Live For The Last Time)

Live At The Academy