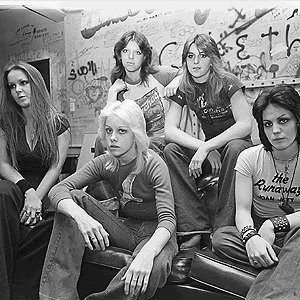 The Runaways were an American all-girl rock band from Los Angeles, California, who performed from 1975 to 1979. Believed at the time to have been a novelty act formed by producer Kim Fowley, who thought the notion of five teenage girls dressed in leather and lingerie performing heavy metal music was highly marketable, the band released its eponymous first album in 1976. The band's lineup was: * Cherie Currie, lead vocals and keyboards * Joan Jett, rhythm guitar and vocals * Lita Ford, lead guitar

The band's lineup was:

Despite the apparent "jailbait on the run" gimmick, the girls in the band were proficient at playing their instruments and wrote or co-wrote most of the band's material and, as later became obvious, were serious about their music. Their best known song is 1976's "Cherry Bomb" which has been covered by many other bands, including the punk band Bratmobile.

The Runaways made five albums and went through several personnel changes. Michael Steele was briefly part of the band before their first album, and later joined The Bangles. In 1977 Vicki Blue replaced Jackie Fox on bass guitar and Joan Jett took over as lead singer after the departure of Cherie Currie. In 1978 Laurie McAllister replaced Vicki Blue. The band broke up in 1979.

Jett and Ford both went on to achieve substantial success as solo artists in the 1980s. Currie went on to a briefly successful career as an actress, appearing in "Foxes" with Jodie Foster, before falling into heavy drug use. She later recovered and wrote an autobiography, "Neon Angel". West continued with music, sometimes playing with her former bandmates. Fox went to UCLA and Harvard Law School and became an entertainment attorney.

There was some progress made towards a Runaways reunion at the end of the 1990s, but this was killed off by Lita Ford who backed out at the planning stage, to the disgust of Jett. Currie did join Jett onstage in 2001 to sing "Cherry Bomb", the first time they had performed together in close to 25 years.

In 2004 Vicki Blue directed a feature-length documentary named "Edgeplay - A Film About The Runaways". The film includes interviews with most of the band members as well as producer Kim Fowley.

The Runaways paved the way for female oriented punk bands like X-Ray Spex, Bikini Kill and most recently, The Donnas.

Most recently a movie called "The Runaways" was released starring Dakota Fanning as Currie and Kristen Stewart as Jett.

The Best Of The Runaways: 20Th Century Masters The Millennium Collection