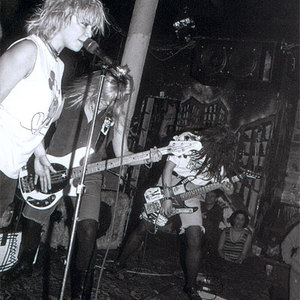 7 Year Bitch was an American punk rock band from Seattle, Washington that was active between 1990 and 1997. Their career yielded three albums, and was impacted by the deaths of their guitarist Stefanie Sargent and close-friend Mia Zapata of fellow Seattle punks The Gits. 7 Year Bitch was formed in 1990 by vocalist Selene Vigil, guitarist Stefanie Sargent, bassist Elizabeth Davis and drummer Valerie Agnew.

7 Year Bitch was formed in 1990 by vocalist Selene Vigil, guitarist Stefanie Sargent, bassist Elizabeth Davis and drummer Valerie Agnew. Vigil, Sargent, and Agnew had been playing together in the Seattle band Barbie's Dream Car when their bassist left for Europe. They subsequently recruited Davis and renamed their band after the movie Seven Year Itch.

At their first concert, the band opened for The Gits, who would prove to have a significant influence on their music. In 1991 the band released the single "Lorna" and signed with C/Z Records. Their first album, Sick 'Em, was released in 1992, but it was overshadowed by Sargent's death on June 27. Sargent passed out on her back after returning home from a party where she had drunk alcohol and taken a small amount of heroin. She died of asphyxiation when she failed to wake up after throwing up the contents of her stomach. After a prolonged period of uncertainty, the band decided to continue, recruiting guitarist Roisin Dunne as Sargent's replacement later that year.

In July 1993, longtime friend and Gits frontwoman Mia Zapata was brutally raped and murdered while walking home late at night. This event, coupled with Sargent's death the previous year, had a profound effect on the group. As a reaction, the band recorded and released their second album ?Viva Zapata! (1994) in tribute to both of their fallen friends. Valerie Agnew also became the primary instigator and co-founder of the anti-violence and self-defence organisation Home Alive. On April 8, 1994, the band played a benefit show for Rock Against Domestic Violence at the Cameo Theatre on Miami Beach, alongside Babes in Toyland and Jack Off Jill.

In 1995 the band signed with Atlantic Records, and in 1996 released their third album, Gato Negro. Following the tour supporting Gato Negro, guitarist Roisin Dunne left, and was replaced by Lisa Faye Beatty, the band's live sound engineer and long-time friend.

In early 1997, the band began recording material for what was to be their fourth album. The band moved from Seattle to California, Elizabeth Davis and Valerie Agnew to San Francisco and Selene Vigil to Los Angeles. With the recent departure of their guitarist, Roisin Dunne and the geographical separation between bandmates, Seven Year Bitch's career came to a close after a final tour with San Francisco's Lost Goat.

Following the break-up of 7 Year Bitch, bassist Elizabeth Davis joined the San Francisco-based band Clone, with whom she performed until 2003. In 2005 she helped to form the band Von Iva. Vocalist Selene Vigil formed a gothic/psychedelic-influenced band by the name of Cistine, in 2000. Roisin Dunne joined the band The Last Goodbye in 2006, and now resides in New York.

Their songs, "The Scratch" and "Icy Blue" were featured in the movie Mad Love with Drew Barrymore and Chris O'Donnell.