temple of the dog 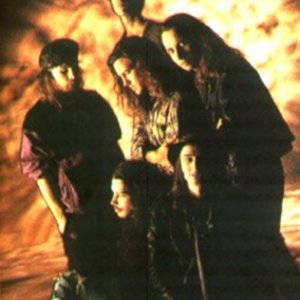 Temple of the Dog was formed in 1990 by Soundgarden's Chris Cornell as a tribute to the late Andrew Wood, frontman of Seattle, Washington rock group Mother Love Bone after Wood died of a heroin overdose. Cornell, Wood's close friend and roommate, helmed the project, which took its name from a lyric in the Mother Love Bone song, "Man Of Golden Words." The band also included Soundgarden's drummer Matt Cameron, Wood's former bandmates Jeff Ament and Stone Gossard, and lead guitarist Mike McCready .

Eddie Vedder, at the time auditioning for the position of vocalist in Pearl Jam, also provided co-lead and background vocals on several songs. One song Vedder provided co-lead vocals on was Hunger Strike, which became the band's biggest hit. Ament, Gossard, McCready, and Vedder formed Pearl Jam not long after recording for Temple of the Dog. Interestingly, Cameron went on to become Pearl Jam's drummer over half a decade later.

The album was originally released on April 16, 1991 to little fanfare, only selling around 70,000 copies, but in the summer of 1992, the album received new attention. Though the album had been released more than a year earlier, A&M Records realized that they had in their catalog what was essentially a collaboration between Soundgarden and Pearl Jam, who had both risen to mainstream attention in the months since the album's release due to the growing popularity of grunge music. A&M decided to re-issue the album and promote "Hunger Strike" as a single, with the video subsequently entering heavy rotation on MTV. The attention allowed both the album and single to chart on Billboard.

Temple Of The Dog (Deluxe Edition)

Temple Of The Dog