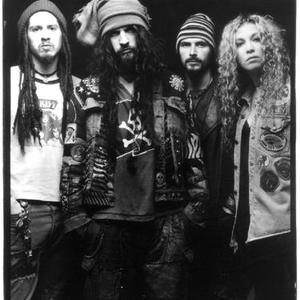 White Zombie was a metal band from New York City, New York who were active between 1985 and 1998. In their most popular lineup, they consisted of Rob Zombie (vocals, guitar), Jay Yuenger (guitar), Sean Yseult (bass), and John Tempesta (drums). They were considered part of the industrial metal, groove metal and alternative metal genres, although they originally began as a noise rock band. After they disbanded, Rob Zombie would go on to a wildly successful career as a solo artist, film director and screenwriter.

Named after the 1932 Bela Lugosi film, White Zombie's musical style was sample-heavy, based around groovy riffs and Rob Zombie's snarling vocals. The samples that filled their records were mostly from obscure horror films, but used creatively to create a kind of carnival freak-show vibe.

Rob Zombie, still known at this time as Rob Cummings, supported himself through multiple jobs, including working as a cycle courier. Most famously, he was a production assistant on Pee-Wee's Playhouse, but he also worked as a designer on pornographic magazines. At this time, he became involved with Shauna Reynolds, another up-and-coming designer. Together they shared a love of classic horror and sci-fi, heavy music, and the weirder corners of American underground culture. They decided to form a band that would draw upon all these influences and White Zombie was formed. Rob took vocals and the name Rob Straker (later changed to Rob Zombie), while Reynolds became the bassist and assumed the name of Sean Yseult. They became the only constants in the often-fluctuating band line-up.

White Zombie best showed their signature style on their final two studio albums. La Sexorcisto: Devil Music, Vol. 1 and Astro-Creep: 2000 Songs of Love, Destruction and Other Synthetic Delusions of the Electric Head were impressive displays of their sample/riff style, thanks to higher production values.

In 1998, Rob Zombie founded his own label, Zombie-A-Go-Go, signing surf and horror acts like The Bomboras and The Ghastly Ones, as well as compiling the mix album Halloween Hootenany. He was managing the new band of his brother Michael, now known as Spider One, the punk-tinged Powerman 5000, but also looked to his own solo career.

After huge opening week sales of his first solo album, Hellbilly Deluxe that dwarfed those of any White Zombie release, it was announced that the band had split up. Bassist Sean Yseult left to form female horror-rockers Famous Monsters and, later, Rock City Morgue. Rob Zombie went on to continued success with his solo music project, and new acclaim as a successful film director.