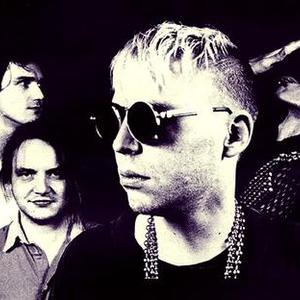 KMFDM is an industrial rock band and the brainchild of founding member Sascha Konietzko. It was founded in Hamburg, Germany on February 29, 1984 as a joint effort between Konietzko and German painter/multi-media performer Udo Sturm to perform for the opening of an exhibition of young European artists at the Grand Palais. Typically featuring a revolving lineup, Konietzko is the only member to be on every album. However, the current lineup has been stable for the four most recent albums.

KMFDM's first two proper albums (which were preceded by a cassette-only release, Opium 1984) What Do You Know, Deutschland? and Don't Blow Your Top, were dominated by samples and abrasive electrofunk. Both are influenced by Frank Zappa and On-U-Sound; particularly the latter album, which was mixed by Adrian Sherwood. Wax Trax! licenced Don't Blow Your Top for America, making it their first US release.

Raymond Watts left to form Pig. The remaining members added Rudolph Naomi and Morgan Adjei to record UAIOE, which significantly expanded their sonic palate: the album experiments with reggae (Loving Can Be An Art), metal (En Esch), and industrial funk (More and Faster, released as a single). This record, and the subsequent non-LP singles Virus (a dub-influenced record) and Godlike (their first embrace of Metallica-like guitar work, which is actually a slight sped up sample from Slayer's Angel Of Death ) began to attract a substantial fanbase.

Signing outright to Wax Trax, the band?having lost Adjei, added guitarist Svet Am, and having opened for Ministry on their Mind tour?released Naive, another stylistically varied record that became their first notable college radio hit. The title track and Leibslied demonstrated their dance-industrial sound (as did a subsequent non-LP single, Split), Piggyback and Die Now-Live Later crossed their metal leanings with their electrofunk roots.

In 1992, the band released Money; its singles, Money, Vogue, and Help Us Save Us Take Us Away (the final single on Wax Trax before the TVT merger), were all well-received, and a subsequent tour solidified the group's standing as a preeminent industrial band. Another non-LP single, Sucks, was a statement of purpose for the group ? anti-corporate and anti-pop music.

With 1993's Angst, the group had narrowed its range of styles, embracing heavy metal on almost every track (the notable exception being the female-sung The Problem). The album's first four songs, Light, A Drug Against War, Blood, and Lust, run together like an industrial-metal symphony; the rest of the album is more conventional post-Ministry industrial metal.

Watts returned for Nihil in 1995, and the rejuvinated band rebounded with a strong album featuring Juke Joint Jezebel, a bouncy, poppy track that infamously appeared in an episode of Beverly Hills 90210. The album proved their biggest commercial success.

Expectations were high for 1996's Xtort, and upon release it became their first record to enter the Billboard album charts. But the record proved artistically disappointing, with too many songs reprising previous material. Nicole Blackman's spoken-word piece, Dogma, was the record's highlight.

Live In The Ussa

Our Time Will Come