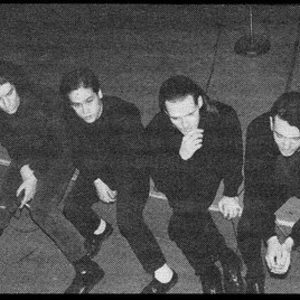 7 years? That's how long it's been since Penal Colony's seminal Cleopatra release, ?5 MAN JOB?. In that time, many of Penal Colony's contemporaries have released new records and toured in support of those records several times over. Entirely new flavors of electronica have come and gone. A different president was in office when ?5 MAN JOB? came out. All of this begs the question: What happened? ?That would take more space to explain than the audience for this document would probably care to endure,? quips D MADDEN, sole surviving member of Penal Colony.

?That would take more space to explain than the audience for this document would probably care to endure,? quips D MADDEN, sole surviving member of Penal Colony. ?A small part of the Reader's Digest version would be that I suffered a number of health problems, both mental and physical; financial problems, you name it. It took some time to dig my way out of those holes, some of them I'm still working on. Further, I had become disillusioned with the Industrial scene and all of it's subgenres. For awhile there, things just seemed to be stagnating. As a result, I had all but given up on the idea of making another Penal Colony record. It wasn't until I heard the Cyberage radio show, and some of the other industrial radio shows on the web, that I got excited about it again.?

And so, with consent from the good graces of fellow founding members Chris Shinkus (Bass) and Jason Hubbard (Drums, Samples, Percussion), Madden forged ahead on his own, and began work on a new collection of songs in early 2001. The fruits of his labor can be heard in the new Penal Colony LP, ?UNFINISHED BUSINESS.? Scheduled to drop May of 2003 on DSBP Records. But before jumping forward too far, perhaps we should start from the beginning?

Penal Colony's beginnings go back to the summer of 1992. Three of the original members ? Guitarist Andy Shaw, Bassist Chris Shinkus, and Drummer Jason Hubbard ? arrived fresh from the corpse of popular Goth-Glam-Punk outfit The Texas Vamps, hailing from California's Inland Empire. Madden was an Orange County native and Guitarist/Vocalist of L.A. Goth monsters Ex-Voto, exiting in 1991 when the rest of the band relocated to New Orleans. After several months of performing around Hollywood and the Inland Empire, Penal Colony piqued the interest of some record industry types during a show at The Roxy in Hollywood, and after a minor bidding skirmish, was picked up by Cleopatra Records in 1993. The self-described ?Punk band with a sampler? saw the release of their debut LP, ?PUT YOUR HANDS DOWN? (its title taken from a remark made by Rock n' Roll legend Chuck Berry in the infamous Chuck Berry ?Golden Shower? bootleg) in 1994. Not long after, what began as a 5 song EP evolved into their second long-player in 1995, a remix ECD entitled ?5 MAN JOB? that included alternate renditions of their material by the likes of Front Line Assembly, Psychic TV, Spahn Ranch, and Leatherstrip. A national tour was launched in support of ?5 MAN JOB?, with Penal Colony as the opening act in a package that included then-labelmates Electric Hellfire Club.

Shaw parted ways with the band shortly after the release of ?5 MAN JOB?; Shinkus and Hubbard were unable to be part of the tour, so the audiences for the ?5 MAN JOB? tour witnessed an alternate lineup that featured Madden and keyboardist Paris from Roz William's Shadow Project. Sadly, Penal Colony quickly disintegrated at the end of the tour, plans for a new lineup that would have included Shinkus, Hubbard, Madden, and members of the touring band were scrapped.

Madden relocated to the Northwest in 1998, his ongoing interest in electronica saw the re-formation of pre-Penal Colony project Simstim that year, with an independently released album titled ?JACK IN, LOG ON, NOD OUT? dropping in 1999. Simstim played a number of raves and warehouse parties in the Seattle and Portland areas until they dissolved in early 2001.

Another Madden effort that started auspiciously as yet another new side project, Penal Colony's third and latest release, ?UNFINISHED BUSINESS?, marks a new era for a 21st century Penal Colony. Drawing equally from Madden's jungle, drum and bass, and electronica explorations over recent years and the punk/industrial/cold wave power of its days of yore, ?UNFINISHED BUSINESS? is an amalgam of styles old and new. From the EBM/Elektro-pumped ?Falling Down the Stairs? and ?Hypothalamus Now!? to the metallic drill-and-bass onslaught of ?Don't Let them Forget to Tag Your Symptom?, to the old skool Penal Colony hip-hop grind of ?Unfinished Business? and the signature mosh-pit-techno pound of ?Scion?; ?UNFINISHED BUSINESS? simultaneously pulls the sentimental ?5 MAN JOB? strings of the listener and challenges with bleeding-edge rhythmic landscapes and textures.

Plans are for ?UNFINISHED BUSINESS? to be released both as a CD and Limited Edition CD/"Special Features" DVD release. The DVD will include videos for songs from the record, movie clips on the making of the album, original lyrics and working drafts; and a track-by-track video commentary, with Madden breaking the tracks down into their individual components, and talking about how they came to be.

?I've long been a big fan of the ECD medium,? Madden explains, ?But one of the things I've noticed about it as of late is that no one is really taking it to the level DVD video has taken supplemental content to, and I think that's sad. Taking this approach to the multimedia content will make it less of an excuse for creating eye candy or a cheap way to drive the listener to the band site, it avoids some of the annoyances attached to listening to a hybrid CD from a computer, and makes it more of a truly immersive experience.?

How does Madden feel about this new rush of activity for Penal Colony? ?It does feel a little scary to have a go of this thing all by myself,? Madden continues, ?but I feel good about the new material, and I feel like UNFINISHED BUSINESS is the Penal Colony journey ? or incarceration ? that I had always wanted to take people on."