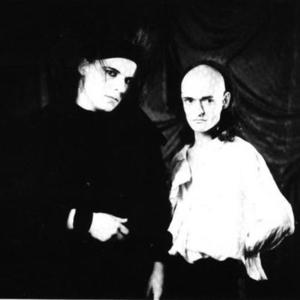 After many musical experiments, Stefan Ackermann (voices and lyrics) and Bruno Kramm (instruments, music) decided to form Das Ich in 1989. * In 1989, the band released the demo CD "Satanische Verse" and after another year their debut album "Die Propheten" on Bruno Kramm's own label, Danse Macabre. Das Ich skillfully mixed electronic, symphonic and early industrial elements into an explosive cocktail unprecedented in the often cliche ridden German music culture. Das Ich established itself with a fixed position in the scene and became the very epitome of experimental and electronic music.

* In 1989, the band released the demo CD "Satanische Verse" and after another year their debut album "Die Propheten" on Bruno Kramm's own label, Danse Macabre.

Das Ich skillfully mixed electronic, symphonic and early industrial elements into an explosive cocktail unprecedented in the often cliche ridden German music culture. Das Ich established itself with a fixed position in the scene and became the very epitome of experimental and electronic music.

They are celebrated as the starting spark of a new genre of post wave, post Kraftwerk, post Neubauten era, and successfully led the way in the charts of the independent scene. Tours all over Europe strengthened the position of Das Ich, who quickly got a reputation for being "apocalyptic eccentrics", since their concerts appear to be evil and bone-jarring spectacles.

* After the release of their maxi CD "Stigma" in 1993, Das Ich went off on an extended tour through all of Europe and the U.S., and in addition played at various festivals, for example the Peter Gabriel WOMAD in Hamburg, as well as at the Documenta in Kassel.

* After that followed what up to now is their most compressed work as well as their least accessible, "Staub". Its success underpined their precedence. Released right at Christmas time, "Staub" was on the waiting list of the German Media Control Charts for 11 weeks.

It took about 2 years to create this work, in which both the innovation that characterized their debut, and modern industrial-elements (comp. "Das Ich im Ich") were amalgamated. Harsh noise-loops bedded into symphonic arrangements and combined thematically with the Holocaust of self-contempt in modern human society rendered "Staub" a milestone for electronic music of the nineties. 8 tracks, which catapulted Das Ich to international significance and which carried on the importance of the German industrial-electro-scene. With "Staub" Das Ich played a tour containing more than 60 shows whole over the world. "Staub" was also released domestically in the USA on the Californian label Tess Records, ran by William Faith of Faith and the Muse, while "Die Propheten" was re-released on Black Orchid Records from Miami.


* After the band recruited the drummer Chad Blinman on the U.S. tour, Das Ich grew into a genuine live band. In 1995 they put the live album "Feuer" out on the market to question the term "canned music", which all electronic bands have to deal with sooner or later. * Immediately after that, a project done together with the famous metal band "Atrocity" was released. The album "Die Liebe" was a successful attention-getter for both bands and is still numbered among the first representatives of the successful metal/gothic crossover movement of the time.

Until today, many of these crossover bands refer to this album as initial innovation and influence.

* However, the work had to be interrupted for half a year in order to compose the soundtrack album "Das Innere Ich" for the underground movie "Das Ewige Licht". After a further successful tour in the U.S. in May of 1997 with the new drummer Jakob Lang, the work on "Egodram" could finally begin again and be completed at the end of 1997. While all the previous releases appeared on the Danse Macabre label, Das Ich decided in the summer of 1997 to sign a worldwide recording contract with Edel Records for "Egodram".

* The first single "Kindgott" which was out taken from the new album was released in December 1997.
* In February 1998 the successful "Egodram" album and the second single "Destillat" with a stunning videoclip, directed by the wellknown Qfilm company, were released.

* From March to April 1998 Das Ich toured Germany, Austria and Switzerland. In May they played the International Wave Gothik Treffen in Leipzig. * After touring for the first time Spain and Mexico they finished the work on their literal work in June, "Morgue" which features songs to the poems of the famous German expressionist writer "Gottfried Benn" in an extreme diversity which brought them also a fantastic feedback from cultural institutions whole over Europe. In November 98 Das Ich toured France and Germany again to present some of their new songs.

* In 1999 it was time to celebrate ten years of Das Ich with "Re_Laborat" and the big USA Totentanz Tour 99. This album was a successful hit on the dance floor. It offers various remixes from well-known bands like Deine Lakaien, Atrocity, VNV Nation, And One and many others. The smashing dance floor hit "Destillat", remixed by VNV Nation became a club hymn for the summer of 2000 worldwide. The dark romantic track "Reanimat", only available on a limited double CD was transferred to a videoclip, directed by Hans Helmut H??ler, with whom the band worked on "Das Ewige Licht" before. "Re_Laborat" was also brought to France on XIII Bis Records domestically, while their online archives www.dasich.de found birth on the internet.

* *In 2003 "Das Ich" released a double CD box, a Best Of called "Relikt" with a 48 page booklet. They also toured again the USA and Russia for the first time with a tremendous effort and success.

*In the middle of the burning summer 2004, Das Ich released their breathtaking new album, called Lava which focuses on emotional issues. For the first time in the bands outspanning history, love, hate, greed and other human feelings struggle against the ratio, the understanding of the human being. It is the fight of the Freudian "Es" (it) against the moral "Ich" (Ego)

* In 2006 Das Ich released Cabaret, a gothic album based on theatrics.

* In 2008 Das Ich released the EP Kannibale, which they call their harshest and most brutal endeavour yet.