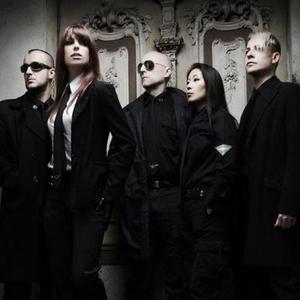 Kirlian Camera was founded by the keyboardist/vocalist Angelo Bergamini in Parma, Italy in Spring 1980. The band really was born in 1979, called Suicide Commando, but this name was dropped for the existence of a namesake band. So, when Bergamini started to interest to paranormal phenomena, he knew about a special device invented by Semion Kirlian to take photos of the aura of the human body and from this took the name of the group, suggested by Mauro Montacchini.

The band really was born in 1979, called Suicide Commando, but this name was dropped for the existence of a namesake band. So, when Bergamini started to interest to paranormal phenomena, he knew about a special device invented by Semion Kirlian to take photos of the aura of the human body and from this took the name of the group, suggested by Mauro Montacchini.

Other initial components of the band were the keyboardist Fabrizio Chiari and the bassist Mauro Montacchini. In 1980 the singer Simona Buja joined the band and the group was completed.

The first live apparition was in 1980 at Teatro Cristallo in Milan (Italy).

Considered the Fathers of the Italian Electronic Music, the long career of Kirlian Camera started recording and sending 25 copies of the Dawn tape to the main Italian labels.

Contemporary, Montacchini left the band and he was replaced by Giorgio Vecchi. So the band records the first miniLP Kirlian Camera, released by Italian Records.

New changes of line-up in 1982: Fabrizio Chiari left the band to join East Wall, and his substitute is the polistrumentist Paul Sears, while Bruno Bizzarri replaced Vecchi.

Meanwhile some records for various labels follow (note that Passing Masks was released under the name of Simona Buja because the band was still contracted with Italian Records) and finally the first full-length LP, It Doesn't Matter, Now, from which will be out two singles.

The official line-up is then Bergamini credited as keyboardist/writer and Sears that performs synths and bass. However present are the bassist Paolo Marchesi, and the producer/drummer (in a track) Charlie Mallozzi.

After this work, line-up changes again and together with the guide Angelo Bergamini and Paul Sears comes back Simona Buja as vocalist and the bassist Bizzarri. Furthermore, the electronic drummer Piero Canavera and the unofficial guitarist Renato Ollivo join the band.

It follows the hit-single Blue Room that gives a lot of popularity to the group in Europe, and some contrast inside: Paul Sears left the band, and with the new-entry producer/drummer Charlie Mallozzi (already present in It Doesn't Matter, Now) begins the sodalice with the new label, Virgin Music.

The band gained a lot of popularity and even TV appearances, especially in Italy. But this label tried to repeat the exploit of the previous single, refusing to release not-commercial material (like the entire materials then released in 1995 on 1985-1986 / I), and promoting possible hit-singles like Ocean and releasing Heldenplatz only thanks to the insistance of Bergamini.

The line-up for this album is particulary consistent, and comprises the momentary return of Montacchini. The very important changing happens after some year, with the joining of vocalist Emilia Lo Jacono (also keyboardist), that becomes the second permanent member together of course with Bergamini, that plays always more instruments.

For the indipendent label of Lo Jacono, Heaven's Gate, it's released in 1991 the third LP called Todesengel The Fall Of Life that obtains good sales, permitting the band to continue his travel.

So, with the new permanent member Simon Balestrazzi, (percussions, guitar programming), the band releases an impressive amount of records, principally licensed by Discordia (The Label). These records often present contributions by other musicians, and sometimes Kirlian Camera collaborates with entire other groups, like Andromeda Complex, Dive, :Wumpscut:.

In parallel, the live activity was born and improved. In fact, apart Italy, the band often plays gigs in Germany and near countries like Austria, Switzerland and Holland, and its popularity grew. Many tours happen especially in Germany, like the tour in Summer 1993 with Mephisto Waltz (Nigra Nebula as supporter), and the "Dark X'Mas Festival" mini-tour at the end of that year with Dive, Die Form, Cat Rapes Dog and so on. Very intense are also the "Total Eclipse Tour" in 1995 with Second Decay as supporter, followed by the "Obsession Tour" to promote the split work with Dive, together with Dive itself and the supporter Arcana Obscura, in Germany and Belgium.

But it's to promote Pictures For Eternity that the band plays their best gigs, during the 1996 "Eternity Tour" in Germany and Austria, supported by Limbo, and during the "Pictures '97 Tour" in 1997, that reachs also Holland (supported by Camerata Mediolanense).

In 1997 there is another important line-up changing: Balestrazzi drops out, and Barbara Boffelli (vocals) and Ivano Bizzi (keyboards, already sporadic collaborator that soon won't play in band but continue to rotate around the group) join. Follow a pair of long miniCDs like The Desert Inside and Drifting and a long waited double retrospective (The Ice Curtain) that permits to hear what Kirlian Camera played almost two decades before.

After other concerts (like a Germany tour in Spring 1998 and even a Slovenia mini-tour), an incredible event happened: Germany press, the famous newspaper "Der Spiegel", throws racism accusation against the band (also against Death In June and Non), inviting the followers to boicottate the gigs and the band itself.

So, in the successive single The Burning Sea, Bergamini and the rest of Kirlian Camera were forced to insert a CD-ROM video that in absolute silence explains the absurdity and the lack of fundament of these accusations, moved by astute persons that try to control people with deceive for own interests (like the research of a scandal to improve the printing of their magazines/newspapers).

Of course the promotion of the following album Unidentified Light was condizionated by these unfortunate events and during the Unidentified Light Tour the band was forced sometimes to obey at the rules of the "politically correct" eye.

In 2000 again a new line-up change. The official formation includes of course Bergamini and Emilia Lo Jacono, but Barbara Boffelli drops out. She is replaced by Elena Fossi, already credited for Unidentified Light.

The next work was called Still Air and sees Kirlian Camera returning to the oppressive and chilly atmospheres of a past time, obtaining enthusiastic reviews everywhere. Unfortunatly some bad events continued, like the very unfortunate gig organized at Kassel (Germany) by Thaglasz, the Death In June fan-club, where the band was forced to play outside the factory where was projected the concert.

2000 however was a rich year for the band, because a very ambitious project was realized (and released the year after), a box called Kalte Container that is the right tribute for the 20 years of a band so little understood and always criticized with no real reasons.

Meanwhile a new miniCD called Absentee, that reachs full-lenght album timing, was released by this three-elements formation and, presented as the ideal companion of Still Air, for many it's even better.

In 2002 a series of re-releases is announced to allow many Kirlian Camera fans to get unfindable material. The most important of this is surely Uno that features, after 22 years of existence, the first demo and the first 12".
This year sees also the rising of many side-project releases, the most important are surely Stalingrad, the project of Angelo Bergamini, Elena Fossi and Ivano Bizzi, and Siderartica, Elena Fossi band with the help of Andrea Savelli and her brother Andrea Fossi.

Meanwhile lots of attacks come toward the band, the usual pseudo anti-nazi propaganda, that causes some concert deletation and various boring events.

Emilia Lo Jacono becomes a collaborator of the band due her charge of work.

Moreover, the band self-releases the first official live disc called Live In London, taken from a shocking concert in London in November 2003, as a special limited edition available at the concerts only.

After so many line-up changes, especially concerning live act, at the beginning of 2004 the band seems to reach a definitive studio formation: Angelo Bergamini and Elena Fossi of course, with the addition of Simone Mul? coming from "La Fille Biaise".

But this year will be remembered due the release of the masterpiece Invisible Front. 2005, album waited since three years that sees collaborations with Naevus, Jarboe and so on, and represents a new era for the band, as well as Still Air already traced the beginning.

With the powerful German label Trisol behind, this album sold something like 11,000 copies in about a month, and quickly became one of the most appreciated ever.

Most of the 2005 was spent into isolated but successful gigs along the Europe. Greece, Denmark, Italy, Germany, Spain, Switzerland, Holland saw perfomances of Kirlian Camera and/or Siderartica/Stalingrad, as well as a new creature, the solo-project of Angelo Bergamini called Uranium USSR 1972.

Finally, after a live preview of the new album held in Prato in October 2005, on the end of January 2006 the new amazing record saw the light. Called Coroner's Sun, the first limited edition (including a full-length Bonus CD with exclusive material) was declared sold-out just after few days since the release.

Radio Music A (The Best Of)