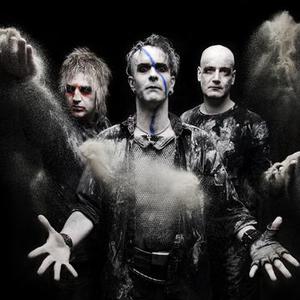 For more than a decade, the German Electro-Wave-Band Project Pitchfork delights thousands of fans worldwide with a unique mixture of danceable beats, breathtaking melodies and deep lyrics. With 10 albums, 6 eps, and more compilation appearances than you can shake a stick at, Project Pitchfork have reached the status of "masters of electro-goth music". Since 1994 every album released by the band entered the Official German Charts, and they have been nominated twice for an Echo Award.

Since 1994 every album released by the band entered the Official German Charts, and they have been nominated twice for an Echo Award. In 2002, the french director J??r??me de Missolz was so fascinated by Project Pitchfork's music, performance and philosophy, that he featured the band in his movie "Zone Reptile".

Besides a 12 minutes concert footage shot especially for the film, the music of Project Pitchfork is present throughout the whole motion picture. The lyrics of the songs are often used to express the main character's emotional inner world, becoming an important part of the story-telling process.
The band is also very famous for their energy and intensity on stage: their live-shows are known to be legendary. They toured extensively and played hundreds of shows all over the world, exciting the crowds in countries like Canada, Brazil, Argentina, the United States of America, Norway, Sweden, England, Belgium, The Netherlands, Poland, Spain, Italy, Greece, France, Latvia, The Russian Federation, Austria, Switzerland and, of course, Germany.

Now Project Pitchfork is back with the new album "Dream, Tiresias!", which is going to be released worldwide on the 27th of February 2009. A long awaited release, if we think that the last regular album "Kaskade" was published in 2005. In the meanwhile, though, Project Pitchfork did not remain inactive: in 2006 the band brought out their first download-only release 'Wonderland/One Million Faces', which by fans' demand was released on CD one year later.

In that same time, Project Pitchfork's frontman and mastermind Peter Spilles brought to life two new side-projects (IMATEM and Santa Hates You) in order to be able to direct his creativity into different channels.

While Santa Hates You fits the "hard and loud" stylistic concept, providing rhythm-oriented musical landscapes and a juicy sarcastic/ironic touch in the lyrics and image, IMATEM celebrates the Synth Pop aspect -if you will- which is carried with harmonious and deep melodies throughout the whole oeuvre. Also, a peculiar characteristic behind the IMATEM project is that, while Peter Spilles entirely composes the music, he often invites renowned fellow musicians to perform the vocals on his compositions. He already collaborated with artists such as Ronan Harris (VNV Nation), Der Graf (Unheilig), Sven Friedrich (Zeraphine/Solar Fake) and Stefan Grossmann (Absurd Minds), to name just a few.
Spilles states: "Fulfilling the needs of these two musical alter-egos of mine, has the great side effect of generating a sort of creative "free space", providing me with clarity about where I really want Project Pitchfork's musical future to be, without trying to make it sound like something else. In other words: my two side projects allow Project Pitchfork to go back being Project Pitchfork, and to stay Project Pitchfork." That surely is the case, as the upcoming album "Dream, Tiresias!" confirms. To begin with, it is a 100% electronic album, as were some of Project Pitchfork's most successful releases, such as "Io", "Alpha Omega" and "Daimonion".

Spilles declares: "the new album definitely transports the typical musical spirit and atmospheres that our fans love, but in a darker, more powerful and brand new way."

Look Up, I'm Down There CD2

Look Up, I'm Down There CD1