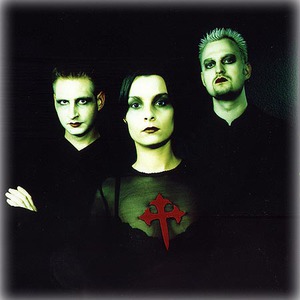 Evils Toy from Germany saw the light of day in the summer of 1992, when future band members Volker Lutz and Thorsten Brenda were introduced to one another by a mutual friend. They took an instant liking to each other, the existing equipment masterly complemented one another and so the founding of an Electro-Band was virtually an inevitable consequence. Bands such as Depeche Mode, Front 242, Invisible Limits ...

Bands such as Depeche Mode, Front 242, Invisible Limits ... inspired the two founding members, which meant that the concerted effort soon bore first fruit. Within a few weeks the first songs were created, which were then sent to relevant record companies in form of a demo tape.

In January 1993 the band was signed by the Nuremberg Hypnobeat / Hyperium label as successors of Project Pitchfork, who had left the label at that time. However, it still took almost another year before the Debut-CD Human Refuse was actually released. The album came like a bomb and caused positive to enthusiastic reactions not only with the press but also with the listeners. The combination of driving rhythms and catchy tunes so typical for Evils Toy seemed to be exactly what everyone had been waiting for in vain for quite some time, and therefore it was not surprising that the band could register an increase in sales.

The band released their second album Morbid Mind in the December of 1994, which they presented live on a 12-city-tour of Germany in April 1995, which was very well-attended. ?Morbid Mind? soon established itself in the alternative scene and was a must for every record collection. In the beginning of 1996 the single ?Organics? was released, which climbed to number 12 in the German alternative charts, was voted single of the month by a well-known German magazine and developed into a hit in clubs world-wide. The American label partner (Metropolis Rec. / Philadelphia) demanded an exclusive remix of ?Organics? to be able to promote the song via radio stations.. As a result of this Evils Toy entered all American college-radio charts and the sales numbers increased.

In the summer Volker Lutz produced the third album XTC Implant in the bands own recording studio ?Evil Empire?. This album also entered the German alternative charts, placing itself between Fanta 4 and the Smashing Pumpkins. Pretty good, huh? The second successful 11-city-tour of Germany followed in April 1996 to present ?XTC Implant? live. Due to lighting rented and programmed especially for the tour the concerts were not only an audio, but also a visual experience.

The band adopted this concept for all following live performances, so that the concerts received the subtitle ?Visual Illusion? from the next tour onwards. Illusion was the key-word for the next longplay CD. The album Illusion clearly related the bands versatility. From soft soundtrack sound collages to the typical Evils Toy electric-thunderstorms, Illusion contains everything your heart desires and, like its predecessors, soon became a classic of the alternative genre. This album was of course also presented live on a distinct tour which took the band through 10 German cities, Switzerland, the Netherlands and Belgium and to Sweden. As on the last tour, the specially rented lighting made each show an experience.

In the mean time Volker Lutz was composing the title music for a video series for the show-hypnotist Pharo, known for appearances on German shows such as Hans Meiser (RTL), Arabella (Pro 7), Bitte L?cheln (RTL2), Gottschalk (SAT.1). The duo became a trio in the summer of 1998. From now on, Oliver Taranczewski is to accompany Volker and Thorsten. Oliver, born in Darmstadt, had already written lyrics for Evils Toy before joining the band and now supports the band as keyboarder. ?And One? (Virgin) released the song Silver Century, a song written exclusively for And One by Evils Toy, on their single Sitata Tirulala.

"Angel's only!" is the best description for a change in trend in the Evils Toy camp. The fifth album Angels Only! shows a change of underground club hits to partly radio suitable commercial ballads, but even still Evils Toy stay true to their typical style. Melody is the key word that is the albums central thread. The album is presented live in Germany, The Netherlands, Belgium, Switzerland and the UK and successfully celebrated. Further concerts are confirmed for Spring 2000 in Mexico City, Rome and for Easter in London. Meanwhile Volker Lutz wrote a further song for the band ?And One? in Autumn 1999. The song Don't need the Drugs got released on the album ?Virgin Superstar?.

Evils Toy have been in their own studio ?Sonicstage? since November 1999 to produce their next album Silvertears. To ensure a professional production, the band will be working in the studios of the rockband ?Franz K.?, which Evils Toy took over in January 1997 from the German Status Quo support band.

?Silvertears? is the consequent further development of ?Angels Only!?. A mixture of pop, drum'n'bass and typical electro ? la Evils Toy forms an energy and melancholy which could make you lose a silver tear or two. And if you can't cry, you can at least dance ? it liberates.

As of 2001 the band was renamed to T.O.Y. for further information look under that name.

The band have produced many remixes for other bands like Apoptygma Berzerk, In Strict Confidence, De/Vision and !Bang Elektronika. Volker has also undertaken many album productions in his SonicStage Recording Studios. He has worked with bands like And One, L'?me Immortelle, Funker Vogt and Pulcher Femina.

In 2004 Volker made a song for the German radio play "The three investigators"-Song contest. Also in 2004, the computer game giant Konami used a special remix done by T.O.Y. on the new PS2 & Xbox release: "Dance Dance Revolution Ultramix 2". Bands like Neuropa, Echo Image, Alien#Six13 or Midihead have also contributed to the soundtrack.

In 2005 Oliver released an album under the name Yavin 4 in the US. An album sounding more like the older Evils Toy releases mixed with modern dance and drum & bass elements. Also he produced the Cruciform Injection album "Aftermath" that has been released in 2006

After weak split rumours concerning the future of T.O.Y. they are, in fact, working on new songs. All such songs are more or less raw demos, some with vocals, some without, but represent the kind of music fans expect to hear on the next T.O.Y. release.

In May 2009 Oliver left the band for good. Obviously there were different opinions concerning the direction of T.O.Y. and the new songs. Volker will finish the album which will be released in autumn 2009 on his own.