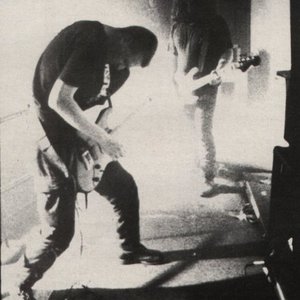 Godflesh are an industrial metal band from Birmingham, England, formed in 1988 by Justin Karl Broadrick (guitar, vocals, and programming) and G. C. Green (bass). They are highly regarded as one of the founders of industrial metal. The group disbanded in 2002 but reformed in 2010, appearing in few festivals and starting to produce a new studio album. In 1988, Broadrick contacted Green about reforming Fall Of Because, who fell apart in 1987.

In 1988, Broadrick contacted Green about reforming Fall Of Because, who fell apart in 1987. Justin decided to take over on guitars, and they chose to use a drum machine to replace Justin as a drummer. The newly formed band decided to change their name to Godflesh.

Godflesh established a presence in underground music with albums such as Streetcleaner and Pure, which demonstrated the effectiveness of lo-fi production values in heavy music. A brief flirtation with major label Columbia Records in 1994 for Selfless and the Merciless EP saw the duo take on a more high-end production approach. In 1996 Godflesh released Songs of Love and Hate, which featured the drumming of Bryan Mantia (Guns N' Roses, Primus, PRAXIS). The next album, 1999's Us And Them, saw the group experimenting with a more electronic, drum and bass-oriented sound in which the guitar played a less central role. In 2001 Godflesh released the double album retrospective In All Languages. That same year they released an album of new material, Hymns, which featured the precise drumming of new band member Ted Parsons (formerly of Swans and Prong) and brought the band back to its slow and heavy roots while retaining elements of its experiments with electronica.

Green left the band in late 2001. It was announced that he would be replaced by former Killing Joke and Prong bassist Paul Raven; however, Godflesh disbanded in 2002 when Broadrick suffered a nervous breakdown just before departing for a tour of the U.S. As a kind of parting gift, the group released a remastered version of their extremely rare 1994 EP Messiah, which was doubled in length with all new remixes. Broadrick and Parsons went on to form Jesu in 2003.

Godflesh will reappear for a few shows in 2010, including one at Hellfest, France, as the only show in Europe. These performances coincide with the re-release of their seminal album Streetcleaner remastered with an additional disc of unreleased mixes, demo tapes and live performances.

"On April 10th 2002, I disbanded Godflesh. This was something I had painfully been pondering since GC Greens' departure from the band in Oct 2001. Regrettably it took until the day of leaving for a lengthy U.S tour for the realization to finally take its toll on me. Unfortunately the finality of the decision and the responsibilities of making the decision proved too much for me to bare, and I collapsed under the weight. I found that without GC Green, Godflesh is not Godflesh, and him leaving proved to be an omen for me. I also feel that everything we originally intended or even imagined with Godflesh we have done. My only regret has been the hurting of both remaining band members Ted Parsons and Paul Raven, and disappointing those that believe in Godflesh worldwide... In the near future, my new rock project Jesu will surface. So this is by no means the end of my songwriting/guitar/vocalizing. Simply the end of a chapter. Endless gratitude to all those that have believed in and supported Godflesh throughout the 14 year history. You know who you are... Long live the new flesh..."

Drawing influences from SPK, Whitehouse, Throbbing Gristle, Swans, Brian Eno and Black Sabbath, among others, Godflesh were among the pioneers of industrial metal.

Godflesh is known for their unique mixture of industrial drum machine beats with droning, discordant guitar and powerful, intermittent bass. (On their earlier albums, the rhythms, synths, and samples are credited to "Machine" or "Machines". Later, Godflesh would make use of human drummers Bryan Mantia and Ted Parsons.) Their eerie, slow, and repetitive style is commonly described as "apocalyptic". The Godflesh sound was once described as "Pornography-era Cure on Quaaludes".

Broadrick's vocals are often guttural, making use of something akin to the death grunt technique, yet they also at times show a softer, more melodic side, as in "I Wasn't Born to Follow" from 1992's Pure. Godflesh lyrics are terse, cryptic, and bleak, often emphasizing duality or opposition. Paranoia and martyrdom are also common themes in Godflesh's music and cover art.

Broadrick has also taken inspiration from Leonard Cohen; both artists have albums titled Songs of Love and Hate. In the song "Mothra" (from Pure), Godflesh borrows the lyrics "Your pain is no credential here / It's just the shadow of my wound" from the song "Avalanche" on the aforementioned Cohen album.

A World Lit Only By Fire (Deluxe Edition)

World Lit Only By Fire